Breaking Down A Political Ad Targeting Beto O'Rourke's Past 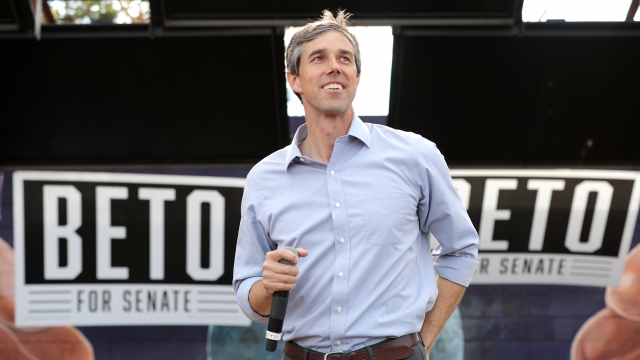 The Club For Growth, a conservative advocacy group, released a two-minute ad packed with a number of negative claims about Beto O'Rourke.

Even before Beto O'Rourke officially announced his campaign for president, he was already the subject of political attack ads.

The Club For Growth, a conservative advocacy group, released a two-minute ad packed with a number of negative claims about O'Rourke. Some of them are pretty easy to check out.

"Causing a collision while driving drunk, then fleeing the scene to avoid accountability," the ad says.

Yes, O'Rourke was arrested for drunk driving after causing a crash in 1998. A witness told police O'Rourke tried to leave the scene, but he was never charged for that. The misdemeanor DWI charge was dismissed after O'Rourke completed a diversion program, and he's repeatedly said choosing to drive drunk was a terrible mistake.

"Casting aspersions on working women, whose, quote, 'only qualifications seem to be ... large breasts and tight buttocks,'" the ad says.

O'Rourke did write that, but it wasn't exactly a comment about "working women." Those words were pulled from a pretty brutal theatre review he wrote for his university newspaper in 1991. The show he critiqued was the original Broadway production of "The Will Rogers Follies." O'Rourke has since apologized for "making disrespectful and demeaning comments about women."

But other statements in the ad aren't so black-and-white.

"Pushing a downtown redevelopment scheme to bulldoze a poor Hispanic neighborhood while enriching developers like his father-in-law," the ad says.

A private-sector group linked to O'Rourke's father-in-law put together a plan to redevelop El Paso's downtown. Our partners at Politifact found O'Rourke did support it while he was on the city council, but it's hard to say if the project would have "enriched" his father-in-law and other developers. In fact, O'Rourke abstained from some key votes on the project, and ultimately, the city's plans changed. The Hispanic neighborhood mentioned in the ad, known as El Segundo Barrio, was left intact.

The statements in political attack ads often contain nuggets of truth but leave out key context. That can leave voters with an incomplete picture, and much of this ad aimed at O'Rourke appears to fit that mold.