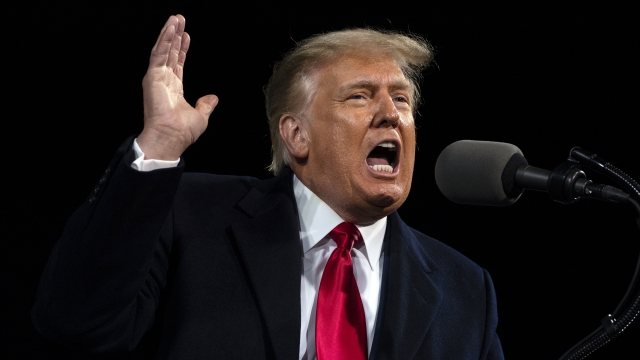 At the start of his call with Georgia election officials, President Trump incorrectly says he won the state.

“I think it’s pretty clear that we won,” President Trump says on the call. “We won very substantially in Georgia.”

President-elect Joe Biden beat Donald Trump in Georgia by 11,779 votes out of more than 5 million cast.

It was a close race, but the result has been certified by the secretary of state and governor, both Republicans.

The president also says, falsely, there were 300,000 “fake ballots” added to the tally late on election night.

He appears to be referring to the counting of mail-in ballots, which favored Democrats.

President Trump told his supporters not to vote by mail.

“It’s a catastrophe waiting to happen,” he said from the Oval Office on Aug. 5.

More Democrats than Republicans mailed in their ballots, which weren’t counted as quickly. But this was expected, not mysterious.

A Newsy investigation this fall found voters do, on occasion, illegally vote in place of someone who has died, often a recently deceased spouse or relative.

Georgia’s secretary of state says two votes were cast in the names of dead people this year -- not 5,000.

At another point in the call, President Trump says he heard ballots were being shredded.

“We hear they're shredding thousands and thousands of ballots and now what they're saying, ‘Oh, we're just cleaning up the office,’" he says.

There was shredding going on in Cobb County, Georgia, but not of cast ballots. County officials say they got rid of old emails, absentee ballot duplicates and other documents they say weren't relevant to the election.

“They were doing normal office shredding, getting rid of old stuff, and we investigated that,” we hear on the call from Ryan Germany, general counsel to the Georgia secretary of state.

“I mean, in other states, we think we found tremendous corruption with Dominion machines but we'll have to see,” the president says.

Yet the Department of Homeland Security found “no evidence that any voting system deleted or lost votes, changed votes or was in any way compromised.”