Fact-Checking Debate Comments From Sanders And Delaney On Health Care 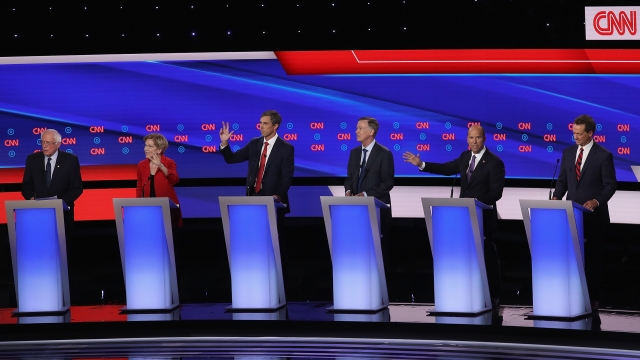 Health care was the most talked about issue during night one of the Democratic presidential debate on CNN. Do these comments hold up to scrutiny?

Health care was, by far, the most talked about issue during the first night of the Democratic presidential debate in Detroit, hosted by CNN.

We're going to dig into two comments on that issue and see if the candidates' statements stand up to scrutiny. First we'll look at Sen. Bernie Sanders, one of the front-runners and a supporter of Medicare for All.

"Right now, we have a dysfunctional health care system. Eighty-seven million uninsured or underinsured, 500,000 Americans every year going bankrupt because of medical bills, 30,000 people dying while the health care industry makes tens of billions of dollars in profit," Sanders said.

Sanders threw out a lot of numbers, so we'll take them one at a time.

First, he said 87 million people are uninsured or underinsured. His statistic is a perfect match for data from a February 2019 report by The Commonwealth Fund. But it's worth noting that there's no single definition of what it means to be underinsured. That label typically applies to people who have health insurance, but still pay high out-of-pocket costs compared to their total income. Not knowing exactly where to draw the line makes coming up with a nationwide estimate a little difficult.

Next he said 500,000 Americans go bankrupt because of medical bills every year. Again, there's a recent study that seems to back up that number. A report from February estimated that 530,000 families file for bankruptcy each year because of medical issues and bills. Even if Sanders' number isn't spot-on, it is well established that medical debt is one of the top reasons Americans file for bankruptcy.

The third number Sanders mentioned is 30,000 people dying while health care companies make billions. There's not really a cause-and-effect in that statement, but it's similar to one the senator has made before. Sanders has previously said the high cost of health care has caused 30,000 people to die while waiting for medical care. He has a point in saying that cost does prevent some people from getting life-saving medical treatment, but experts told our partners at Politifact that's a hard number to pin down.

Let's move on to a statement from John Delaney, who believes in keeping the private health insurance market and adding a public option.

"It's been well documented that if all the bills were paid at Medicare rate, which is specifically — I think it's in section 1,200 of [Sanders'] bill — then many hospitals in this country would close. I've been going around rural America, and I ask rural hospital administrators one question: 'If all your bills were paid at the Medicare rate last year, what would happen?' And they all look at me and say, 'We would close,'" Delaney said.

The former congressman made a similar statement during the first debate. Both then and now, it seems like Delaney is making a connection that doesn't exist yet. It's true that Medicare doesn't pay hospitals as much as private insurance companies do, and a majority of hospitals lose money providing inpatient Medicare services. But experts say it's too big of a leap to assume those situations would spread to a large number of hospitals under a single-payer system. It's more likely that the effects would be varied, with some hospitals faring better than others.

Delaney also missed the mark on how hospitals would be paid under Medicare for All. He said the current Medicare payment rate would expand to everywhere, but Sanders' bill says payment amounts will be determined at a later date.