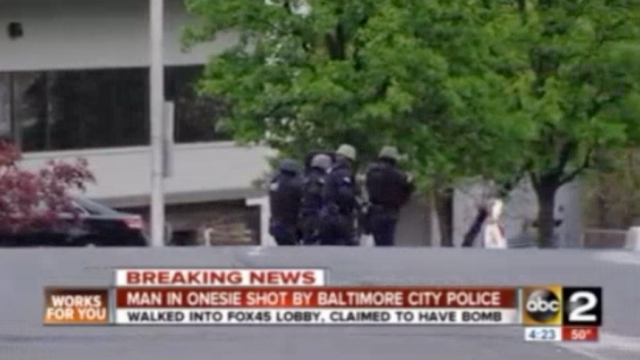 The bomb scare prompted the TV station to evacuate all employees.

A TV station in Baltimore was evacuated after a man walked into the building's lobby saying he had a bomb.

Newsy's partners at WMAR say the man, wearing an animal costume and a mask, walked into Fox45 shortly after 1 p.m. Thursday. The man spoke with a contractor who happened to be in the lobby. He demanded that information on a flash drive be put on the air. The station immediately evacuated and all employees are safe and accounted for.

Around the same time, a vehicle just outside the station was set on fire. Police have confirmed that vehicle is connected to the suspect.

After more than an hour, the suspect, a 25-year-old man, voluntarily walked out of the building. Police say he refused to take his hands out of his pockets, so a police sniper shot him at least three times. Officers then used a robot to secure the area before anyone moved close to the suspect.

"They have to remove the devices that were around him, and that's what the robot did. The robot removed those devices, which included his clothing," Baltimore City Police Department spokesman T.J. Smith said.

After the device was removed and examined, police determined it was fake and was actually stuffed with candy bars. The suspect is in serious but stable condition at a hospital, and he's expected to survive.

During a press conference, police were asked about the contents of the suspect's flash drive, but they said their primary concern was still securing the area.