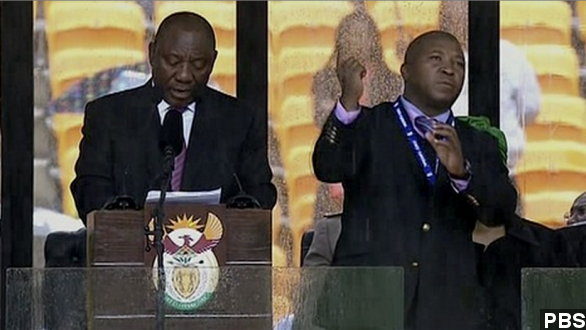 Amid fraud accusations, the sign language interpreter at Nelson Mandela's memorial service claims he had a schizophrenic episode during the event.

The South African sign language interpreter accused of gesturing gibberish at Nelson Mandela's memorial service is standing by his performance.

After being accused of making gestures that made no sense, outraging the deaf across South Africa and the world, 34-year-old Thamsanqa Jantjie told The Johannesburg Star he suffered a schizophrenic episode during the service that caused him to lose his concentration after he began hallucinating and hearing voices. (Via ​NBC, YouTube / eNCAnews)

​"There was nothing I could do. I was alone in a very dangerous situation. I tried to control myself and not show the world what was going on. I am very sorry."

Jantjie went on to say once he was on stage, he felt he couldn't leave despite the attack. So he continued to sign things that didn't make sense.

According to the National Institute on Mental Health, schizophrenia is "a chronic, severe, and disabling brain disorder," which may cause a person to "hear voices other people don't hear [and] not make sense when they talk."

Jantjie says he takes medication for the illness and doesn't know what caused him to have the attack.

But South Africa's leading deaf association called him a "fake" interpreter, citing his inability to gesture even the most basic signs such as "thank you" and "Mandela." (Via Euronews)

The South African government, which was in charge of the service, says it has no idea who he was.

However, previous footage shows him signing next to current South African President Jacob Zuma on several occasions in 2012. The African National Congress, the country's ruling party, told CNN they did not hire him. (Via CNN)

"We have used him on some occasions. But [Tuesday] was not an ANC event. So we cannot answer for [Tuesday]." (Via CNN)

Jantjie says he was paid 850 rand, or about $80, for the day's job and stood by his performance, saying, "I think that I've been a champion of sign language." The South African government says it's currently investigating the incident.