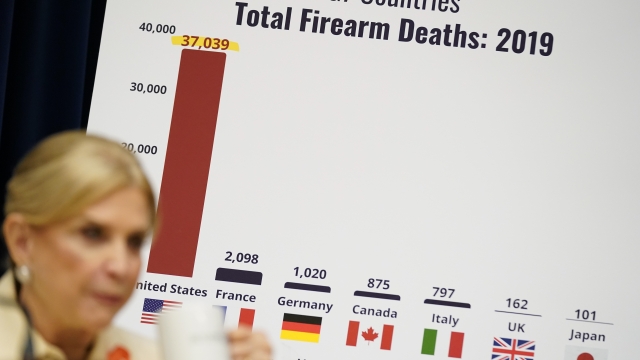 The House Committee on Oversight and Reform is hearing from victims and victims' family members who suffered from recent mass shootings.

The House Committee on Oversight and Reform hearing begins on Capitol Hill with leaders at odds on how to move forward on gun legislation to stop mass shootings around the country.

The committee is hearing from victims and victims' family members who suffered from the mass shootings in Uvalde, Texas, and Buffalo, New York.

McConaughey said he and his wife drove to Uvalde the day after the shooting and spent time with the families of some of the victims.

A 10-year-old girl who survived the shooting rampage in Uvalde told members of Congress on Wednesday how she covered herself in her dead classmate's blood and played dead before calling 911 and pleading for help.

"I thought he would come back so I covered myself with blood," Miah Cerrillo, a fourth-grader at Robb Elementary School, told lawmakers in a pre-recorded video. "I put it all over me and I just stayed quiet."

The video goes on to show Miah's father, Miguel Cerillo, asking his daughter if she feels safe at school. She shakes her head no.

The House is moving quickly to pass legislation in response to the recent mass shootings that would raise the age limit for purchasing a semi-automatic rifle and prohibit the sale of ammunition magazines with a capacity of more than 10 rounds.

However, the legislation has no chance of becoming law as the Senate pursues negotiations focused on improving mental health programs, bolstering school security and enhancing background checks.

But it does allow Democratic lawmakers a chance to frame for voters in November where they stand on policies that polls show have appeal to a majority of voters.

The House is also expected to approve a bill that would allow families, police and others to ask federal courts to order the removal of firearms from people who are believed to be at extreme risk of harming themselves or others.

Nineteen states and the District of Columbia currently have such "red flag" laws. Under the House bill, a judge could issue an order to temporarily remove and store the firearms until a hearing can be held no longer than two weeks later to determine whether the firearms should be returned or kept for a specific period.

The Congressional Budget Office projects that the bill would lead to roughly 10,000 petitions being filed annually.

House Republicans argued that the bill allows law enforcement to deprive law-abiding Americans of their firearms before they have had the opportunity to personally contest a requested order in court.