Families Of Children With Disabilities Create A Community 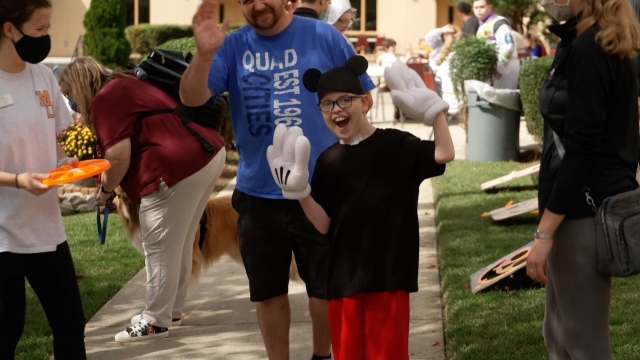 Seven-year-old Ali has cerebral palsy. But that's not stopping her from moonwalking to an annual costume party in Atlanta.

For children with disabilities, life can be filled with endless appointments. This barbecue event, called Boo-B-Que, is for families to have fun and get together.

"I played a game, painted a pumpkin and made a puppet monster," 12-year-old Kaiden Guckenberger said. "l wanted to come here to have fun."

With kids dressed as Mickey Mouse and Elton John, it's a star-studded cast that can't be missed. And parents and kids can feel at ease.

"There are a lot of other people just like ourselves, not a lot of stares," one mother, Taryn Dawkins, said.

It's free from the need to explain behaviors, and it's an escape from questions about their children's disabilities. Here, kids can just be kids. Community is big here.

Ali's mom, Frances McBrayer, is the executive director of FOCUS, the Atlanta-based nonprofit organization that not only organized this event but also helps provide equipment like wheelchairs and chair lifts for families.

"It's so important to feel like you're not in this by yourself and finding a community. Even if it's just a couple of people that you feel like you can relate to just makes all the difference," McBrayer said.

COVID has made it especially taxing for families, particularly the isolation.

"On her communication device, she'd always ask to go places," another mother, Jennifer Harris, said. "The first place we actually went was a doctor's office, and you would have thought we had gone to Disney World because she was so excited to be out of the house."

"Access for people experiencing disabilities is unnecessarily challenging but just as important to get them what they need," said Devon Orland with the Georgia Advocacy Office.

And that's what's happening. Nationally, students who have disabilities were more likely to be referred to the police, and when it comes to adults, 2 in 5 federal and state prisoners had at least one disability. Orland fights for a better system.

"For people who experience disabilities and struggle with articulating what their issues are or what they need and don't have adequate access to advocacy, their behaviors get criminalized," he said.

Orland says it starts young. Early interventions tend to have better success when children mature to become adults. Get-togethers like this can most certainly help.