Family Of La. Kidnapping Victim Rescues Her In Gunfight 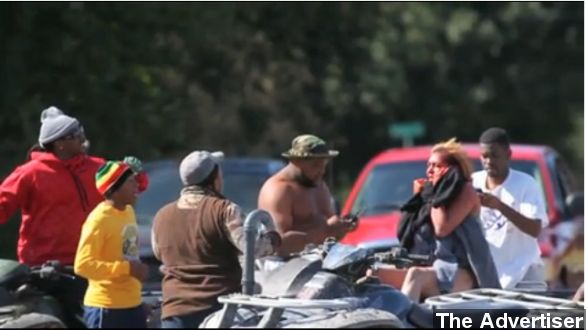 Authorities say a Louisiana woman’s family found and rescued her in a deadly gunfight with her ex-lover and kidnapper.

It's like something out of a movie: A Louisiana woman's family found her and rescued her in a deadly gunfight after authorities said she was kidnapped by her ex-lover.

Bethany Arceneaux's family says she was kidnapped Wednesday by her ex-boyfriend, Scott Thomas, outside their 2-year-old son's daycare center. Witnesses reported he forced her into his car and left their son behind. (Via WVLA)

Arceneaux was missing for two days until her family found Thomas' car nine miles from the abandoned house where Arceneaux was found.

Arceneaux's family searched the area on four-wheelers until a woman's screams were heard. You can see her in this video moments after the rescue. (Via The Advertiser)

"The dramatic moment her uncle carried his terrified and bloodied niece to safety was caught on camera. It appears Arceneaux was stabbed." (Via WJXT)

According to local media outlets, those stab wounds were inflicted by Thomas after Arceneaux's family found the two. That’s when a gun battle ensued and Thomas was killed. Arceneaux reportedly had issues with Thomas in the past, filing a restraining order against him earlier this year after she said he threatened to kill her and their son.

Although Arceneaux's family has praised efforts by police, New York Daily News points out: “The case has also raised questions about why the police were second on the scene. Bethany's cousin, Dawnetta Roy, found it 'upsetting' that her family had to find the missing woman themselves."

However, the police, including a SWAT team, were on the scene around the time Arceneaux was rescued. (Via Atlanta Journal-Constitution)

After Arceneaux was safe, her family and local authorities described how tense the rescue situation actually was.

"I can just imagine how chaotic that confrontation was. The person who acted in defense of Ms. Arceneaux was a relative, a very close relative to her. So I can imagine his emotions were probably very high." ​(Via KATC)

"We was going through all kinds of things. We just buried my brother last Saturday. So the family was grieving, we was grieving. So it was a big relief to finally find her and make sure that she's OK." ​(Via KLFY)

Arceneaux is now in stable condition. No charges have been filed in Thomas' death, but the person who shot him is said to be fully cooperating with police.