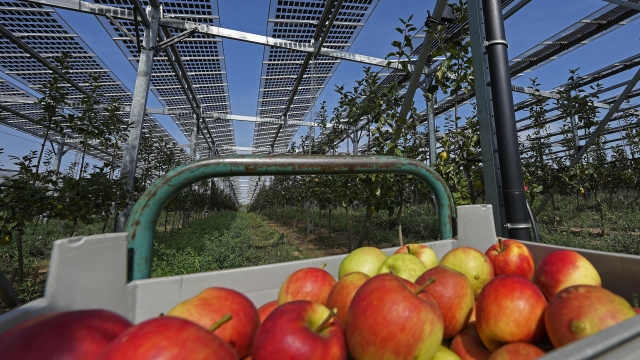 If this sort of farming succeeds, it could help ease competition for land between renewable energy production and agriculture.

It's apple picking season at an organic orchard in Western Germany.

The crop is red Elstar apples.

But there's a second harvest at Christian Nachtwey's orchard:  electricity.

Many of his apple trees are growing beneath solar panels.

"The idea is simple: to protect the plantation without reducing the available growing surface and in particular maintaining production. On top of that there's the solar electricity being generated in the same area,” said Nachtwey.

Getting the right combination of sun and shade is a challenge.

Indiana's solar industry has been booming. It's projected to grow to be the 4th largest in the U.S. over the next five years.

So, Nachtwey is collaborating with researchers on which apple varieties can thrive under solar canopies.

"This is an experimental harvest. It's not conclusive yet. But we're hoping to get some insights over the years to see if it can work the way we want it to," said Nachtwey.

One benefit Nachtwey found was hardly any of the apples underneath the solar panels were damaged by the intense sun that hit the region one day in July.

"We need at least two to three full years to record all the weather conditions that might occur and look at the yield and color that the different varieties of tree produce," said Juergen Zimmer, an expert with the Agricultural Services Department in Rhineland-Palatinate state.

The hope is if this sort of farming succeeds, it could help ease competition for land between renewable energy production and agriculture.

Nachtwey says eventually he could use the energy to power his facility and machines. But for now, he plans to provide electricity to dozens of nearby homes.