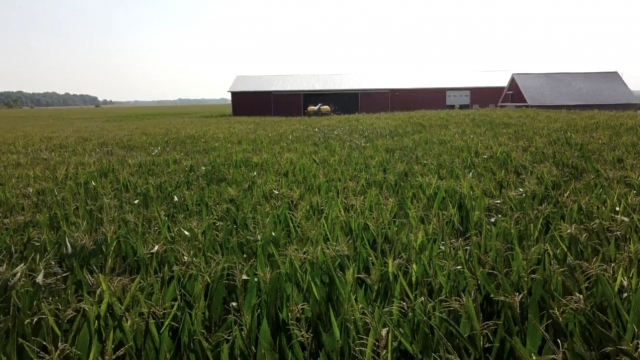 Just what role do farmers play when it comes to climate change?

Some Americans say they need to be held more accountable. Others might argue farmers are transitioning on their own to cleaner energy quite well.

The debate over possible new environmental reporting regulations is heating up, however, with farmers worrying that Washington's latest idea could possibly mean even more expensive food for you and me.

THE SEC AND FARMERS

Cy Prettyman is worried about the SEC — and no we aren't talking about the college football conference.

In government, the SEC stands for the Securities and Exchange Commission.

It is tasked with regulating wall street and publicly-traded companies.

They have proposed a rule to force publicly-traded companies to tell investors about their emissions, climate plans and risks.

So what does wall street have to do with Cy's farm in Ohio?

"Farmers and ranchers have never been regulated by the SEC," Prettyman told Joe St. George recently.

Prettyman says the concern is that farms often do business with publicly-traded companies, companies that under this proposed rule might demand farmers provide details on how much emissions are coming out of their tractors or other pieces of farm equipment.

Cy says the typical farmer doesn't have the time or staff to track that data.

"We only got limited resources on our farm to do what they do," Prettyman said.

THE CASE FOR CHANGE

Of course, there is another side to this debate. Some believe the country needs to start holding all businesses accountable for their emissions— that includes the family farm.

"People have died from climate change," said Steven Rothstein, with CERES, a nonprofit focused on making the economy more sustainable.

He says the heat of the past few weeks is reason enough to focus more on the climate and that having companies report their emissions makes sense.

The rule does not force any company or farm to change their ways — it’s just data.

"It's not saying companies have to do certain things, all it says is they have to disclose so then their investors, the market their owners can make decisions about whether it's good or not," Rothstein said.

"One of the biggest risks companies face today are climate risks," Rothstein added.

Rothstein expects a final rule by the SEC by the end of the year.

He suspects there may be changes to make the smaller contributors to companies, like family farms, exempt from reporting rules.

As for Cy, who is with the Ohio Farm Bureau, he says farmers will be watching this closely.

Lawsuits will likely follow and a possible increase in food costs could occur to account for any new regulation.