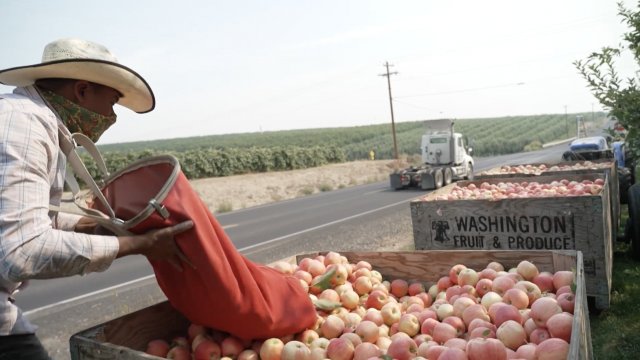 Mano a Mano - a nonprofit family center - has become a lifeline for many of central Oregon's agricultural workers.

More than two million farms scattered across the United States provide produce, dairy and meat that end up on our dinner plates, but the people working long hours in the fields to harvest it all are struggling to feed their own families.

The U.S. Department of Agriculture defines food insecurity as a lack of consistent access to enough food for an active, healthy life. In 2020 nearly 14 million households in the U.S. - around 10.5% - were food insecure, according to the USDA's most recent report, and among those are farmworkers.

Since the beginning of the pandemic more than half of the farmworkers in Washington state have faced challenges accessing food according to recent research by the University of Washington. Another study shows 45% of Latino farmworkers in California's central valley reported food insecurity in 2020.

Ana Peña with the nonprofit Mano a Mano Family Center, says the problem is just as bad in central Oregon.

Peña is a community health worker for Mano a Mano, which means hand in hand. She says the center's food bank has become a lifeline for many of central Oregon's agricultural workers.

"Especially during summer, we'll have maseca coming in, and maseca is awesome for our tortillas, tamales, all those goodies," Peña said.

Providing traditional foods for Latino farmworkers is one thing, but Peña says for many of her clients who live and work in remote rural areas without access to transportation, just getting to the food bank is a challenge. So the food bank goes to them.

A recent tri-state COVID-19 farmworker study revealed that fewer than a quarter of farmworkers in Washington state were able to access food banks because of their limited operations and overlap with work hours.

"They also earn an incredibly low wage where even though they're harvesting the food we all eat they can't afford those same foods themselves," Peña said. "So we're making sure that they have the same opportunities as other folks to have enough food for themselves and their families."

Because of shutdowns from this winter's flooding and the seasonal nature of farm work, many of the agricultural workers in this complex can’t find work right now.

Cristina Carrio is from Guatemala. She says she works seasonally on berry farms, and she's waiting for the season to start up again.

Carrio says it's been difficult to keep her three children fed and the electric and gas bills paid. Mano a Mano food boxes mean she’ll be able to make traditional posole and tamales for Christmas.

The hunger farmworkers experience may be even worse than the numbers suggest. Oregon State University sociology professor Mark Edwards has researched food insecurity in the western U.S. for two decades. He says most official data on farmworker food insecurity comes from the U.S. Bureau of Labor Statistics, which presents its own set of challenges.

"So a federal survey is conducted, and you can imagine that farm workers are, as a group, not going to trust this group, especially if they are here without documents and they're living busy lives, not necessarily in places that are easy to find by surveyors," Edwards said. "And so, they are underrepresented in the surveys, I'm sure, so we don't have excellent data that describes this."

"The people who are out serving among these workers and asking questions and telling the story of what it is that they are experiencing," Edwards said.

With each box delivery, Peña and her team learn more about the challenges farmworkers are facing. One man says he isn't able to work because of leukemia. Another is hoping to hear soon about a winter job at a mill. For all of them, these food boxes will mean the difference between skipping meals and eating well.

"People are struggling and especially now during this pandemic, and it's made a lot of people become homeless," Peña said. "A lot of people are having to ask for a food box for the first time in their lives after working like 20, 40 years."

Pride is a huge barrier. Peña says farmworkers are used to working for the food they provide for their families, and because of their mixed legal status or their fear of jeopardizing their path to citizenship, few apply for government food stamps. This means for many farmworker nonprofits like Mano a Mano are their only safety net.

"For us, farm workers have the utmost respect from our organization because, you know, we're just giving back to them what they give to us," Peña said.

Peña says the pandemic has taught everyone how essential these workers are. She just hopes that lesson will translate into real change - safer work conditions, fair pay and not letting farmworkers go hungry while working to keep food on everyone else's plates.