Fast Food Workers On Strike In More Than 100 Cities 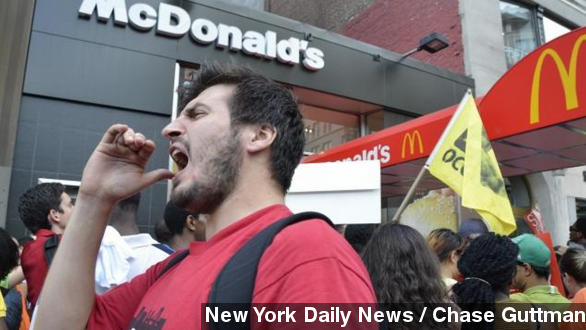 Thousands of fast food workers are expected to walk off the job as part of a national campaign to increase the federal minimum wage to $15 per hour.

Fast food workers are taking the fight to increase the minimum wage nationwide as they plan to strike Thursday in more than 100 cities.

Thousands of fast food chain employees across the country are expected to walk off the job Thursday in what's being billed as the largest strike of its kind since workers began protesting wages in New York City about a year ago. (Via CNN)

Their demands: raise the federal minimum wage to $15 an hour. That's more than double the current $7.25 wage minimum established in 2009. (Via ABC)

According to the U.S. Labor Department, the current median pay for fast food workers is around $9 per hour, or $18,720 per year — $1,000 below the federal poverty line for a family of three.

In a struggling economy, low-wage workers are finding it difficult just to afford the basics like food, housing and transportation. And many families have to rely on food stamps and Medicaid just to get by. (Via NBC)

Many fast food workers say an increase to $15 would go a long way in improving their standard of living. But industry leaders say doubling fast food workers' current wages would kill job growth, and increase the cost of fast food by more than 20 percent.

In response to the strikes, the National Restaurant Association released a statement claiming: "Dramatic increases in a starting wage such as those called for in these rallies will ...  increase prices for restaurant meals, especially in the value segments and lead to fewer jobs created." (Via New York Daily News)

President Obama announced his support for a Senate bill that would increase the federal minimum wage to $10.10 earlier this week — a campaign which renews his efforts to tackle U.S. income inequality. (Via Al Jazeera)

Thursday's protest is expected to last all day.