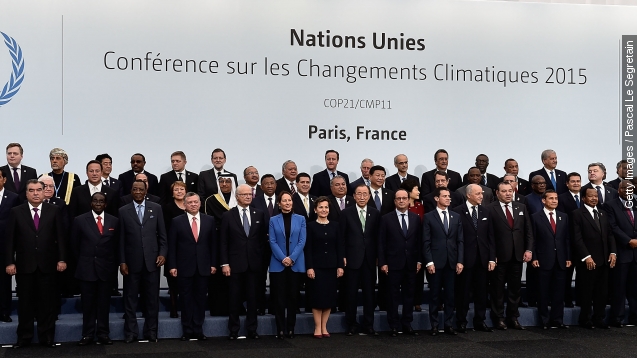 Dr. James Hansen, who first testified about climate change in 1988, doubts the COP 21 agreement will amount to real change, saying it's too vague.

Saturday's agreement in Paris to curb carbon dioxide emissions is being hailed as a turning point for the environment, but the so-called Father of Climate change isn't convinced the deal will amount to anything.

Dr. James Hansen, who first testified before Congress about greenhouse gases in 1988, told The Guardian COP 21 was "just worthless words. There is no action, just promises. As long as fossil fuels appear to be the cheapest fuels out there, they will be continued to be burned."

Close to 200 countries are part of the deal to limit global average warming to two degrees Celsius above pre-industrial levels, and to aim for 1.5 degrees Celsius if possible.

But the accord doesn't specifically detail how much each country has to cut back its emissions. With every nation in charge of its own cutbacks, it could be difficult to enforce any real change. (Video via The White House)

Hansen suggested a fee be levied on major emitters of carbon dioxide to the tune of $15 per metric ton, which The Guardian reports would amount to $600 billion in the U.S. alone.

While the Paris deal itself left some environmentalists feeling heated, the agreement does set up future standards that are more stringent.

Each country will have to continually increase its contribution and, starting in 2018, produce a plan to continue that trend every five years. (VIdeo via United Nations Framework Convention on Climate Change)

While the deal was agreed to in principle, each country still needs to get a thumbs-up from within its own borders. The agreement requested that the UN Secretary General leave the accord open for signing until April 2017.