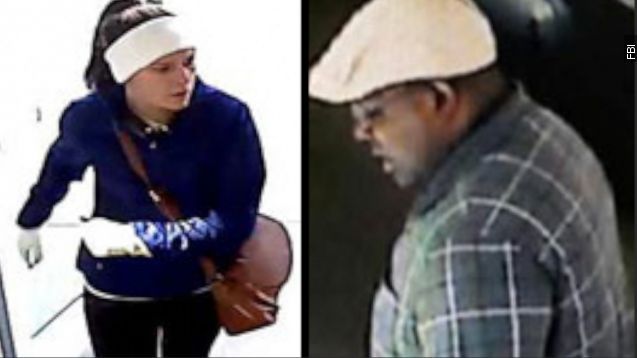 A man and a woman are sought in several armed robberies that have taken place since April of last year.

Federal authorities have arrested a 24-year-old woman they believe is responsible for jewelry heists in several Southern states.

Abigail Lee Kemp was arrested on Friday in Smyrna, Georgia, after allegedly being on the run from authorities since this past April. The FBI also said it arrested a second person seen with Kemp during the alleged robberies but are not releasing the second person's identity.

Last week, the FBI asked for information on a man seen during the heists, but they didn't confirm if he was arrested with Kemp or not.

The heists had taken place in Florida, Georgia, South Carolina, Tennessee and North Carolina over the last several months.

The most recent happened on Jan. 3 in Mebane, North Carolina. Authorities say Kemp entered the jewelry store with a handgun, pointed it at two employees, forced them into a backroom and made off with items in the store's display case. (Video via WTVD)

In September, the FBI released photos of Kemp after a robbery in Panama City Beach, Florida. Again, at gunpoint, Kemp allegedly zip-tied two store employees and then made off with several items, authorities say.

Reports say the value of the stolen items is about $4 million. The FBI thanked the public for tips leading to Kemp's arrest.