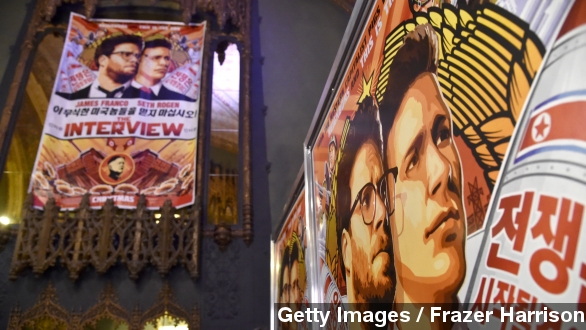 The FBI said Friday it has enough evidence to conclude North Korea's government is responsible for the massive hack on Sony.

The FBI now says it has enough credible evidence to conclude that North Korea’s government is responsible for the massive hack on Sony Pictures Entertainment.

On top of the PR damage, Sony canceled the Christmas release of the movie after the group calling itself Guardians of Peace threatened attacks against theatergoers. The company’s hand was kind of forced though. Major chains like Regal Cinemas, AMC Entertainment and Cineplex decided to pull the movie in light of a terrorist threat from the hacker group Guardians of Peace.

And while the hackers had previously promised a bigger data dump closer to Christmas, CNN’s Brian Stelter got a hold of an email to Sony supposedly from the hackers.

In blaming North Korea for the cyber attack, the FBI statement says, “North Korea’s actions were intended to inflict significant harm on a U.S. business and suppress the right of American citizens to express themselves. Such acts of intimidation fall outside the bounds of acceptable state behavior.”

“The administration believes that activity merits an appropriate response from the United States.”

A statement from the bureau says its investigation got there in part through "technical analysis of the data deletion malware" and observation of "significant overlap between infrastructure" in this and a previous attack directly linked to North Korea.

Many suspected North Korea's government carried out the Sony hack as retaliation for the movie "The Interview," a film about an assassination attempt on Kim Jong-un.

Again, not clear what that “appropriate response” would be, since this is an unprecedented attack in scale. North Korea had all along denied responsibility in the attack on Sony, but had called it a “righteous deed.”

“We ensure the security of your data, unless you make additional trouble,” he read.

But it’s not clear what the U.S. will do in response. White House Press Secretary Josh Earnest told reporters Thursday: