FBI Director Comey Wants A Back Door To Tech Encryption 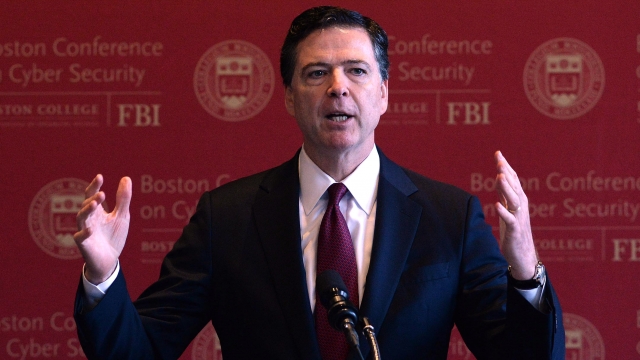 FBI Director James Comey says encryption is used more and more by criminals, and the FBI is powerless when it comes to cracking the code.

"Technology has become a tool of choice for some very dangerous people," FBI Director James Comey said in 2014. "And unfortunately, the law has not kept pace with technology, and this disconnect has created a significant public safety problem we have long described as 'going dark.'"

His tune hasn't changed much since.

"There is no place in America outside of judicial reach," Comey said Wednesday at the Boston Conference on Cyber Security. "That's the bargain. ... Widespread default encryption changes that bargain. In my view, it shatters the bargain."

Hackers have ransomed hospitals, shut down the internet and are accused of influencing the U.S. election. And the risks are growing.

More and more devices are turning to encryption to ensure their users' privacy, and encryption methods are becoming nearly impossible to break.

Comey says that will make it harder for the FBI and other law enforcement to find and prosecute would-be terrorists, drug dealers, pedophiles — you name it.

But the idea of making it easier to access a person's private data doesn't sit well with civil liberties groups or privacy advocates. Weakening encryption for the FBI weakens encryption for bad actors, as well.

And Comey is pushing against encryption on the heels of Wikileaks' document dump on the CIA's ability to compromise phones and TVs. However, the documents don't show that the agency can break encryption.