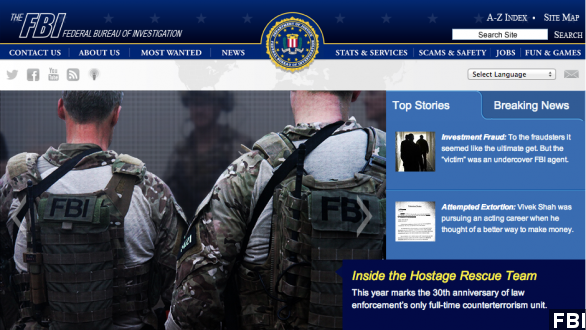 A new report from The Washington Post details malware and phishing techniques the FBI uses to track criminals.

​As the old adage goes, if you can't beat 'em, join 'em. And according to a new report from The Washington Post, that's exactly what the FBI did.

When traditional means of tracking fail or the criminal is especially skilled at evading the FBI, the bureau calls in its special team of hackers. (Via YouTube / centralvalleyreport)

A criminal by the name of "Mo" used different forms of Internet communication to issue bomb threats across the United States. The FBI was unable to identify the man and couldn’t track down a location because Mo was really good at covering his tracks. The FBI had to call in its hackers. (Via The Washington Post)

The team put together a highly advanced piece of malware that was then emailed to Mo's Yahoo! mail address. Using typical phishing tactics, the FBI hoped to bait Mo into installing the software. Digital Trends gives us a quick explanation:

"The [FBI] often attempts to install malware by targeting the email addresses of those who are under investigation. Essentially, law enforcement agencies are using the same phishing techniques as spammers pushing medication supplies or looking to get into your social media accounts."

Mashable says the malware was used to send the FBI location information and browsing history, but it could also do something a little more sinister.

Typically, any time you turn on your computers webcam, an indicator light appears near the camera lens. This is a handy reminder, but it’s also a privacy feature. If a third party gained access to your camera, you’d see the light.

Unless, of course, that third party was the FBI. According to the report, the bureau has ways of activating a computer’s webcam without triggering the indicator light. Perhaps all those people with tape over their webcams aren’t as crazy as you thought.

It's important to note the FBI doesn't just use the webcam technique on any suspect. Not only is the tactic internally reserved for the highest threats, it also requires a warrant. And Ars Technica notes the FBI doesn't always get one.

"A federal magistrate in Houston rejected an FBI request to send surveillance software to a suspect. … [The plan] was 'extremely intrusive' and could violate the Fourth Amendment curbs on searches and seizures, the magistrate said."