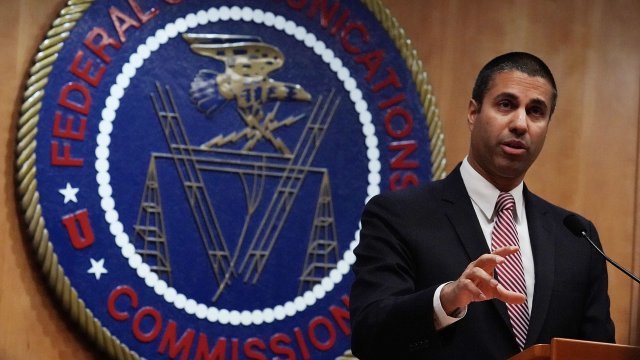 The watchdog says it didn't find any evidence FCC Chairman Ajit Pai concealed a discussion he had with a White House official on the issue.

A government watchdog has cleared FCC Chairman Ajit Pai of any wrongdoing regarding the failed Sinclair-Tribune merger — for the second time.

The FCC Inspector General's Office started an investigation into whether Pai acted improperly when he didn't disclose a conversation he had with a Trump administration official about the proposed deal to Congress. The IG said Monday that it didn't find any evidence Pai was covering something up.

The investigation focused on a July House Energy and Commerce Committee hearing, where Pai was asked if he had any communications with White House staff about the potential merger between the two media companies. At the time, Pai didn't reveal that he'd spoken with then-White House counsel Don McGahn about the issue.

That conversation was divulged in August during a Senate hearing, when Pai told lawmakers McGahn had previously asked him about the merger's status.

But according to the watchdog, Pai's actions didn't constitute misleading House lawmakers because FCC rules don't require him to disclose that information on the record.

This isn't the first time the IG looked into Pai's actions surrounding Sinclair and Tribune. Earlier this year, a separate probe cleared him of alleged bias toward Sinclair.

The merger ended up falling through, though, when the FCC expressed "serious concerns" about it. When it failed to get a green light from regulators, Tribune filed a lawsuit against Sinclair for breach of contract, and Sinclair sued back.

Earlier on Monday, Nexstar announced it's acquiring Tribune in a multibillion-dollar deal, which is subject to shareholders' approval.