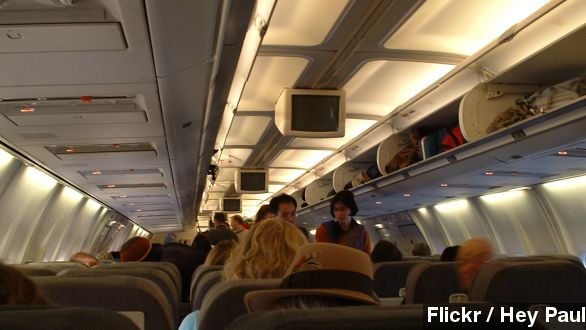 The Federal Communications Commission is considering removing a restriction on using cell phones during commercial flights.

Airplane flights could get a lot noisier in the future, thanks to the Federal Communications Commission's recent vote to consider lifting a ban on cell phone calls in mid-flight.

The FCC's ban on in-flight calls has been in place since the nineties amid concerns that cell phone signals could interfere with communications between planes and air traffic controllers. (Via CNN)

But FCC Chairman Tom Wheeler told a congressional committee new technology has eliminated the risk cell phones pose to airplanes — and thus, the need for a restriction.

"Where the rationale for a rule doesn't exist, the rule shouldn't exist. We are the expert technical agency. New technology removes the technical justification of this rule." (Via C-SPAN)

NPR points out, the agency's likely to get an earful for this move — a recent poll found 59 percent of Americans who have flown in the past year don't like the idea of cell phone chatter on flights.

And the FCC's decision might not matter much in the end. Shortly before the FCC's vote, Transportation Secretary Anthony Foxx issued a statement saying the Department of Transportation will consider its own measure banning cell phone use on airplanes. (Via Politico)

But a Bloomberg reporter says the FCC is right to overturn an outdated restriction, regardless of how unpopular or futile the gesture might be.

"I think the world would be a better place if nobody talked on phones on airplanes, but I also think that you should have the freedom. We have a private marketplace and airplanes can come up with their own standards."

The FCC's vote now leaves the no-phone restriction open to public comment for a year before they make a final decision.