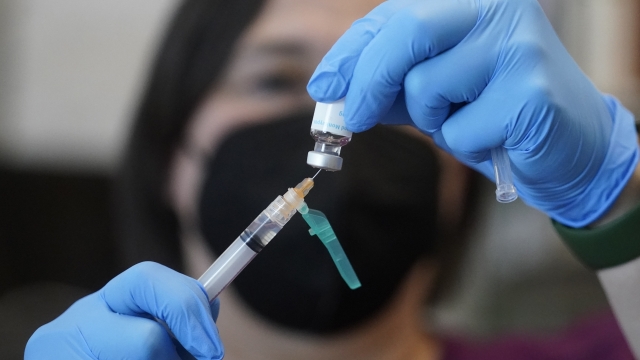 The Jynneos vaccine can now be administered between layers of skin instead of underneath layers, allowing for a smaller dose.

The FDA is allowing a new vaccination method for monkeypox to stretch the vaccine supply.

"This will increase the total number of doses available for use by up to fivefold," FDA Commissioner Dr. Robert Califf said.

"It's safe, it's effective and it will significantly scale the volume of vaccine doses available for communities across the country," said Bob Fenton, White House monkeypox response coordinator.

Now providers can inject vaccine in between layers of the skin instead of completely underneath the skin. By doing so, they can use just one-fifth the dose they use in the traditional method and get many more vaccinations out of a single vial.

"For those who have delayed their second dose, we would encourage them, with now an increased supply, to go ahead and get it," said CDC Director Dr. Rochelle Walensky.

In Los Angeles, health workers are setting up vaccination sites wherever they can, making more shots available to people who have already been waiting for one.

"We're excited because we are bringing the vaccine to places where people live and work who might be at high risk for exposure, so making it easier for people to access the monkeypox vaccine if they need it," said Andrea Kim, with the Los Angeles County Department of Public Health.

It's a welcome scene to those afraid of exposure, especially among men who have sex with men — a population disproportionately impacted by the virus.

"I would say the community right now is pretty scared, unnerved," said Jack Dillon, a monkeypox vaccine recipient. "A lot of my friends are really remaining celibate right now."

Across the country, almost 9,500 people have confirmed cases of the virus, with most of them having a median age of 35 years old.

"Monkeypox is not an STD, although sex is a route of transmission, but it's not the primary route," said Arthur Caplan, NYU Grossman School of Medicine medical ethics director. "It's really skin contact, prolonged skin contact or getting it from, like we're saying, towels or sheets.”

Of the patients reporting sexual activity, 99% were men having sex with men.

"This isn't a gay men's disease," Caplan said. "It's in Africa in many people who are heterosexual. We've seen transmission to kids. There are bisexual people out there who definitely could transmit it to others. It's not necessarily just because they're gay, but the disease affected that group first. It just got into that population first."

With the FDA also authorizing vaccination for high-risk people under 18 years old, parents are questioning how concerned they should be about their kids getting sick.

"Having cases, or even exposures, in children is relatively rare," Dr. Walensky said. "We investigate those. Should they be real exposures, we want to make sure that they have vaccine available to them.”

Changing how the shots are given is a critical step in maximizing that supply.