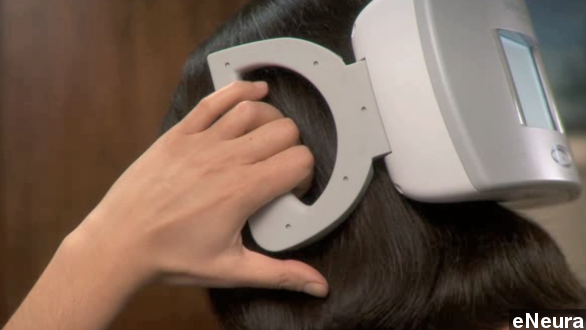 The U.S. Food and Drug Administration has approved the use of a new magnetic device, known as a Cerena Transcranial Magnetic Stimulator.

Millions of Americans suffer from migraines every year, and while there's no known cure, there is a new, drug-free treatment on the market.

The U.S. Food and Drug Administration has approved the use of a new magnetic device, known as a Cerena Transcranial Magnetic Stimulator. (Via eNeura)

It works by stimulating the occipital cortex in the brain. Users hold the device to the back of their heads and press a button which releases a pulse of magnetic energy.

This new device helps relieve pain in migraines preceded by what's referred to as aura — those type of migraines have warning signs like dizziness or trouble seeing. (Via Wikimedia Commons / Dr. Arne May)

​In a clinical trial of 201 patients who suffered from migraines, FDA researchers found nearly 38 percent of those who used the device were pain-free within two hours after using it. That’s compared to 17 percent among those in the control group that didn’t use the device. (Via National Headache Foundation, 9 News)

Two hours may sound like a long time, but experts say it's a big improvement considering some migraines can last up to 72 hours. (Via NBC)

One migraine expert told HealthDay: "Although this device is unwieldy, it may be a preferred choice by those who don't want [drug] treatment."

The FDA says side effects, like dizziness, from the device were rare, but there were single instances of sinusitis, inability to speak and vertigo.