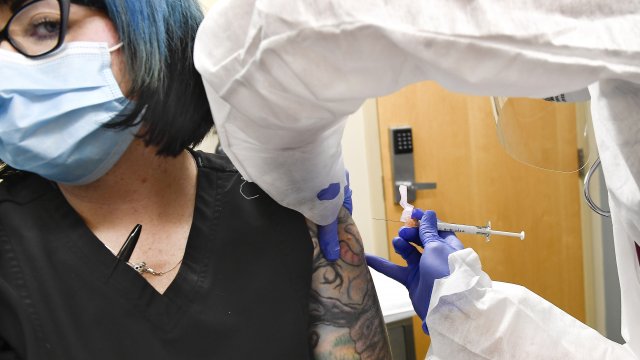 The emergency use authorization of the Moderna vaccine allows millions of additional doses to be distributed across the U.S.

The FDA has authorized a second COVID-19 vaccine as the U.S. broke another daily record for new infections.

The emergency use authorization of the Modern vaccine allows millions of additional doses to be distributed across the U.S. It comes after Pfizer's vaccine was rolled out a week ago.

Both vaccine require two separate shots, and both have shown to be more than 90 % effective in preventing COVID cases. Moderna's vaccine doesn't require the same Arctic-cold storage as Pfizer's. So it's slated for a broader delivery, including to more rural areas and long-term care facilities.

Shipping of the Moderna shot is set to begin Sunday, with the first vaccinations ready to be given hours after they're delivered on Monday.

The vaccines are expected to go first to front-line responders, the elderly and others facing heightened risks for COVID-19. But even with the two vaccines, there's still not enough so far for all health care workers and nursing home staff and residents.

Meanwhile, restaurant workers, barbers, Uber drivers and other professions are lobbying to be included in the next round of shots coming in 2021. Essential workers in food, education, and other sectors will likely be second in line starting early next year.

The new supply of the Moderna vaccine comes as multiple state officials say they are getting less of the Pfizer supply than the federal government promised. States next week are expected to hear how many doses they'll get in the second wave of shipments in January. However, health experts say it will be at least six months before most Americans are vaccinated.