Fearing Deportation, Many Immigrants Are Avoiding Police And Courts 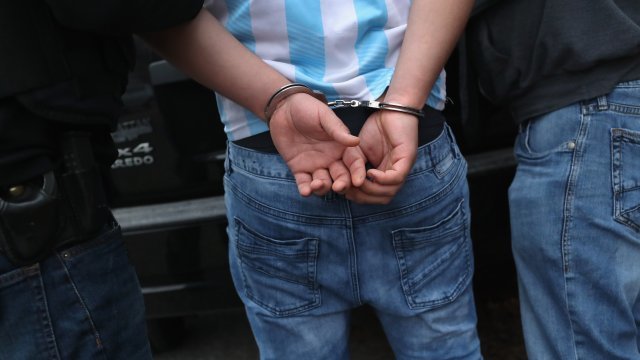 Police chiefs have said reports of domestic and sexual abuse in their Latino populations have dropped, making their jobs harder.

Deportation fears among immigrant communities are high. And while that comes as no surprise, there's an important side effect: Immigrants seem increasingly fearful of their local police — especially when it comes to reporting sexual abuse.

Police departments in Houston, Denver, Los Angeles, San Diego and San Francisco have all recently seen significant drops in reports of domestic violence and sexual assault in their Hispanic communities.

Undocumented immigrants have historically been hesitant to call the police for fear of attracting unwanted attention. But police chiefs around the country say trust issues have been made worse by the Trump administration's stepped-up immigration enforcement plans. They argue that, as a result, their ability to solve cases and protect crime victims has been crippled.

Justice Department Says Domestic Abuse Is Not Grounds For Asylum

"We have about 500,000 undocumented immigrants in Los Angeles, and they are very nervous right now," Los Angeles Police Chief Charlie Beck told KABC.

"It creates an environment, where people feel like, 'If I report this, they are going to be more interested in my immigration status rather than my value as a human being,'" Houston Police Chief Art Acevedo told The New York Times, referring to a Texas law that requires local police to cooperate with federal immigration authorities.

Advocates of President Donald Trump's immigration policies say the police chiefs are reading too much into the data. The director of policy studies at the Center for Immigration Studies, an organization that lobbies for immigration restrictions, told FiveThirtyEight: "It looks to me like they’re trying to enter the political debate. It's very difficult to ascertain whether crime reporting has changed nationally."

The United States Commission on Civil Rights, a bipartisan agency charged with advising Congress, recently expressed unease over the tactic. It wrote: "Stationing ICE agents in local courthouses instills needless additional fear and anxiety within immigrant communities, discourages interacting with the judicial system, and endangers the safety of entire communities."

We Now Know Exactly What ICE Courthouse Arrests Will Look Like

U.S. Immigration and Customs Enforcement formalized its policy on conducting arrests in courthouses.

The White House says ICE officers deployed in courthouses are targeting specific persons and that the agency "does not engage in 'sweeps' or other indiscriminate arrest practices." The administration also argues that because an increasing number of cities don't allow ICE to make arrests in their jails, the agency has to use alternative tactics.

And making an arrest in a courthouse, the government claims, is a safe option both for the officers and for the targeted individuals since courthouse visitors are generally screened for weapons.

Some crime victims who are in the country illegally and assist the police in investigations can get permission to stay in the country thanks the U visa program. However, the U.S. only grants 10,000 of these visas ever year.