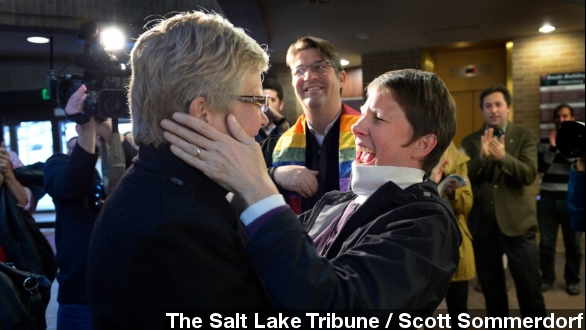 A federal judge struck down Utah's ban on gay marriage Friday after ruling the state's prohibition was unconstitutional.

In his decision, District Court Judge Robert Shelby ruled "the state's current laws deny its gay and lesbian citizens their fundamental right to marry and, in doing so, demean the dignity of those same-sex couples for no rational reason."

Same-sex couples began flocking to county offices for marriage licenses almost as soon as the ruling was handed down. Several counties began issuing marriage licenses right away, while others held off for confirmation. (Via KSTU)

But the judge's decision isn't likely to go unchallenged. Utah's Governor Gary Herbert released a statement on the ruling suggesting he's working on an appeal.

"I am very disappointed an activist federal judge is attempting to override the will of the people of Utah. I am working with my legal counsel and the acting Attorney General to determine the best course to defend traditional marriage within the borders of Utah."

But attorney Paul Burke told KSL he expects the ruling to be upheld on a federal level, and he urged the state not to pursue an appeal.

"We should not see our taxpayer dollars wasted on a frivolous appeal that only seeks to deny love, happiness, and the fundamental rights of Utahans."