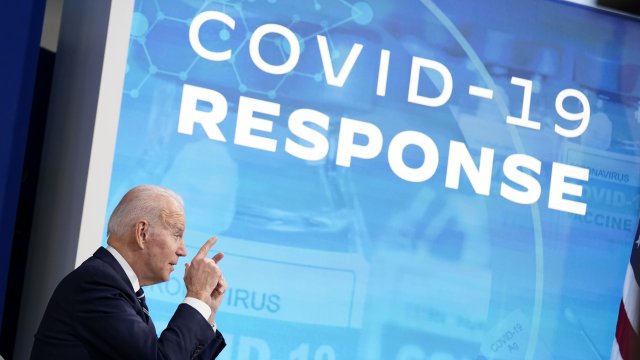 The federal website where Americans can request free COVID-19 tests will begin accepting orders on Wednesday as the White House looks to address nationwide shortages, but supplies will be limited to just four free tests per home.

Starting on Jan. 19, the website COVIDTests.gov will provide tests at no cost, including no shipping fee, the White House announced Friday.

As he faced criticism for low inventory and long lines for testing, President Joe Biden announced last month that the U.S. would purchase 500 million at-home tests to launch the program and on Thursday the president announced that he was doubling the order to 1 billion tests.

But Americans shouldn't expect a rapid turn-around on the orders and they will have to plan ahead and request the tests well before they meet federal guidelines for when to use a test.

The White House said "tests will typically ship within 7-12 days of ordering" through the U.S. Postal Service, which reports shipping times of 1-3 days for its first-class package service in the continental United States.

The Centers for Disease Control and Prevention recommends at-home testing when experiencing COVID-19 systems including fever, cough, sore throat, respiratory symptoms and muscle aches, five days after a potential COVID-19 exposure, or as part of test-to-stay protocols in schools and workplaces.

"Certainly if you're going to gather with family, if you're going to a gathering where people are immunocompromised or where they're elderly or where you have people who might be unvaccinated or poorly protected from a vaccine that might be an opportunity you want to test," said Dr. Rochelle Walensky, the CDC director, on Wednesday.

Officials emphasized that the federal website is just one way for people to procure COVID-19 tests. Starting on Saturday, private insurance companies will be required to cover the cost of at-home rapid tests, allowing Americans to be reimbursed for tests they purchase at pharmacies and online retailers. That covers up to eight tests per month.

The White House said the four-test limit on website orders will be applied to each residential address and will apply to the first tranche of 500 million tests. It estimates that the cost of purchasing and distributing the first block of tests at $4 billion.

Officials said they are cognizant that any launch of a website carries some risks — and memories of the disastrous roll-out during the Obama administration of Healthcare.gov are still fresh — but said they believe they are well-positioned to handle expected demand for tests.