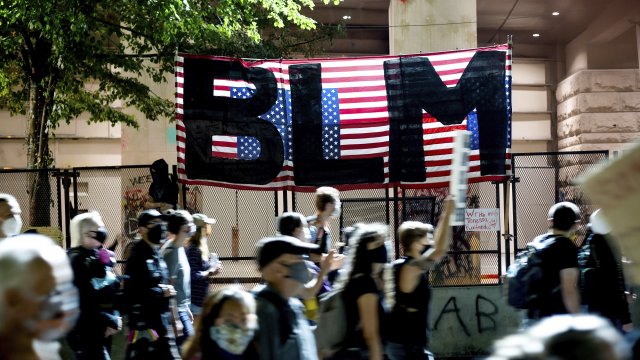 For the first time in several weeks, Portland protesters took to the streets this weekend and were not met by federal officers, tear gas and rubber bullets.

But now that federal forces are headed out of town, Portland protesters say they want accountability.

Attorney Kelly Simon says, "The reaction is, what can we do to stop this? And not just stop but, just as importantly, make sure this doesn't happen to anybody else in the country."

Kelly Simon is an attorney for the ACLU of Oregon and has been in constant contact with protesters and legal observers on the ground in Portland.

The ACLU has filed several lawsuits against the Trump administration and local police to protect journalists, medics and everyday citizens since last month and Simon says she wants to see these lawsuits to the end.

Simon said, "People shouldn't be afraid of getting shot in the head for declaring that black lives matter. People shouldn't be afraid of driving in their car with their child and having the windows busted in and tear gas shot inside, which has happened to somebody. … Nobody deserves to have excessive force used against them to silence their voices, especially voices that are demanding an end to racist police brutality."

The ACLU of Oregon managed to secure temporary restraining orders against federal officers for targeting journalists and against the local police force for live-streaming protests.

Since federal officers were deployed in Portland, they've made dozens of arrests. But according to the Associated Press, the vast majority were charged with non-violent acts.

Bedi said, "Generally what ends up happening in these sorts of cases is the charges often are minor things like disorderly, and then they get dismissed in relatively short order. … So my part of the legal representation is really kind of picking apart what happens after a protest and identifying the violations or trying to advocate and use litigation to try to protect protesters from these civil rights violations before they occur."

Several Portland advocacy organizations and individual protesters have filed a civil lawsuit against the Trump administration for violating their civil rights.

The lawsuit, brought by the “Wall of Moms” and others, seeks unspecified damages but Bedi says these kinds of cases can also go a long way to help heal.

Bedi said, "A protester in Portland could file a civil rights claim and say to the federal government, you have to explain why you did what you did. And the government has to respond, the government can't not respond. And so that process, I think, is one where it firms the power that people have to hold these institutions accountable."

Since Oregon Gov Kate Brown announced that federal officers were leaving the city of Portland, protests have largely remained peaceful.

Simon from the ACLU says protesters on the ground have always been reacting to aggression, not creating it.

Simon said, "I would like to read the words of Max Smith, one of the activists on the ground in Portland and Max says this. 'We came out here dressed in T-shirts and using hula hoops and stuff, they started gassing us. So we came back with respirators. They started shooting at us, then we came back with vests. They started aiming for the head, so we started wearing helmets. And now they call us terrorists. Who's escalating this? It's not us."