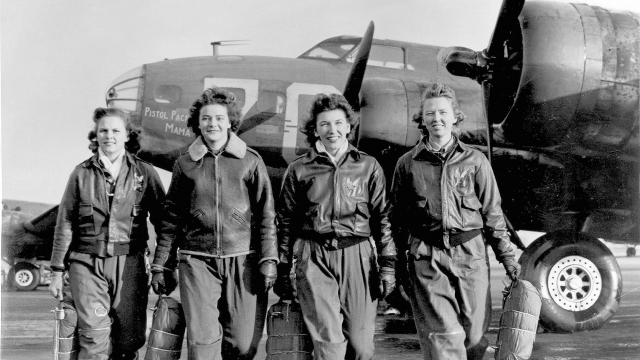 Those who served for the Women Airforce Service Pilots had dangerous roles but were once not considered full veterans.

A group of female pilots from WWII can again be buried on the U.S. military's most hallowed ground.

On Tuesday, the Senate unanimously approved legislation to allow Women Airforce Service Pilots, or WASPs, to be laid to rest at Arlington National Cemetery.

"For men, it would be tough. It's tough for girls, too," an apparent radio voice from the WWII said.

During WWII, these female pilots took on dangerous jobs. They flew new, untested planes from factories to bases and even towed targets in the air that male pilots used for target practice with live ammo.

The catch was these women weren't technically considered a part of the military. Instead, they were civilian volunteers, which meant they weren't eligible for the same benefits. It's believed 38 of these women died in the war, yet American flags weren't allowed to be draped over their caskets.

It wasn't until 1977 that this group of female pilots were given military status. This meant veterans of the program could be buried at Arlington. But last year, the military revoked the right, saying there is little room there.

"They say they're running out of space. This decision flies in the face of our nation's efforts to recognize, reward and treat honorably the contributions of all of our veterans," a member of the U.S. House of Representatives said.

Over 1,100 women served as WASPs. Although the reinstatement is a great honor, fewer than 200 are alive to receive it.

This video includes clips from C-SPAN, Arlington National Cemetery and the U.S. Department of Veterans Affairs and images from the U.S. Air Force, Stickpen and U.S. Air Force Public Affairs.