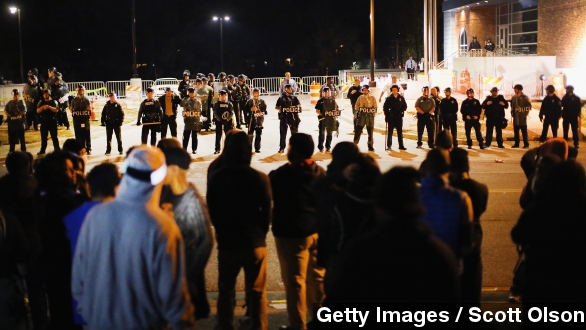 Police, business owners and community leaders worry the riots and looting that broke out in the wake of Michael Brown's death could repeat itself.

It's been more than three months since Officer Darren Wilson shot and killed 18-year-old Michael Brown in Ferguson, Missouri, leading to protests that are still going on.

The grand jury weighing whether to indict Wilson is expected to reach its decision soon, and residents, police and peaceful protestors alike all worry things will get very bad very quickly if Wilson isn't charged.

Tuesday, Governor Jay Nixon announced preparations authorities have taken in case violence breaks out after the decision. They include thousands of hours of officer training on crowd control and protesters' rights, as well as coordination between St. Louis County police, the Highway Patrol and, if needed, the National Guard.

GOVERNOR JAY NIXON VIA NBC: "In the days immediately following Michael Brown's death, peaceful protests were marred by senseless acts of violence and destruction. … That ugliness was not representative of Missouri and it cannot be repeated."

Some of the first images coming out of Ferguson after the shooting were startling: widespread looting of local stores and the complete destruction of a gas station, followed by heavily-armed police wearing riot gear and using tear gas on crowds of protesters. Many are convinced a repeat is inevitable. (Video via KTVI)

"What plan do you have in place that is going to protect our community?" …

"We are getting prepared for war, and that's crazy."

The war analogy isn't too far-fetched. Local police have spent more than $120,000 over the last few months buying extra equipment, including riot gear and crowd control devices. And CNN spoke to a gun store owner who says citizens are arming up, too.

"One hundred percent of the people who have bought a firearm have bought it because of some sort of fear of the unknown, what's going to happen in this next week or so with the Ferguson verdict."

Leaks from the grand jury hearings have suggested Wilson will not be indicted. Autopsy reports and eyewitness testimonies have been reported as lining up with the officer's story.

Monday, the prosecutor said the grand jury is still hearing evidence and to ignore any speculation about the outcome, but there are few who believe the protesters will get the decision they want.