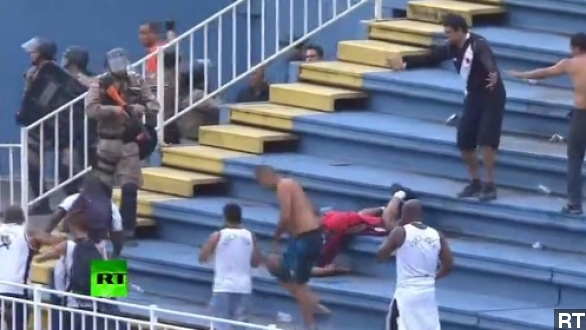 A massive fight between fans in the stands has the world again questioning whether Brazil is a safe place to hold the 2014 World Cup.

A fight at a soccer match in Brazil Sunday left three fans critically injured, and is raising the question again of whether Brazil is a safe place to hold the FIFA World Cup.

"Violence erupting between rival fans at a key national fixture, which actually had to be stopped for more than an hour after some supporters started fighting in the stands. Police were called in to respond, and they did." (Via CNN)

That response from police included the use of rubber bullets and tear gas. This was the final round of a major tournament there.

The fighting started about 10 minutes into the game. According to reports, one man fought others with a metal pipe. A helicopter had to land on the field to transport an injured spectator. (Via Al Jazeera)

Reports vary right now, but some outlets are reporting one of those injured fans is in a coma, others that one has died. And this fight is shedding bad light on a country that's scheduled to host the FIFA World Cup in 2014.

Goal.com quoted Atletico defender Luis Alberto: "We are having a World Cup here next year. It's a shame that this kind of stuff still happens."

Brazil already made headlines earlier this year over multiple beheadings related to soccer.

A former player's wife found his head on their doorstep... (Via The Washington Times)

And over the summer a referee was beheaded, and his head was mounted on the field. (Via Daily Mail)

Those acts of terrible violence had already raised concerns over safety at the World Cup. (Via USA Today)

Still, many argue that fights like the one from Sunday are just a result of Brazil's passionate fans. The World Cup starts in June of next year.