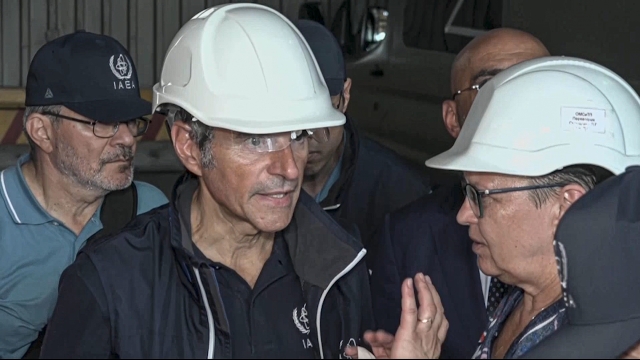 The IAEA is on a mission to help safeguard the plant against catastrophe — and the fighting in the area has underscored the urgency of their task.

Fighting between Russian and Ukrainian forces raged Friday near Europe's biggest nuclear power plant in a Russian-held area of eastern Ukraine, as experts from the U.N.'s nuclear watchdog agency assessing damage sought to prevent even the slightest leak of radioactive material.

Local Russian-appointed authorities said Friday that staff at the Zaporizhzhia nuclear power plant restarted a key reactor just hours after a shelling attack a day earlier forced it to shut down. Ukraine's nuclear energy operator, Energoatom confirmed on its Telegram channel that the reactivated reactor had been plugged back into the power grid.

The head of Ukraine's powerful National Security Council said work was under way to ensure Ukraine's power supply in case connection to the Zaporizhzhia site is lost this winter. Oleksiy Danilov also said Ukrainian authorities weren't fully aware of the situation inside the plant for now — despite the presence of the team from the U.N.'s International Atomic Energy Agency that went in Thursday.

In an interview with The Associated Press, Danilov — a key official in Ukraine's war effort — said Kyiv didn't know whether the plant might have been mined by the Russians, adding: "I want to emphasize that this is a challenge for the whole world, how to make this nuclear facility not dangerous."

Aleksandr Volga, the Kremlin-backed mayor of the Enerhodar, where the Zaporizhizhia nuclear power plant is located, told the Interfax news agency Friday that the successful reactivation left the plant with two working reactors, out of a total of six.

Russia and Ukraine traded blame for the shelling attack which led to Thursday's temporary shutdown of the reactor by its emergency protection system. Energoatom said the shelling damaged a backup power supply line used for in-house needs, and one of the plant’s reactors that wasn’t operating was switched to diesel generators.

Britain's Defense Ministry said earlier Friday that shelling continued in the area near the power plant, and Ukrainian President Volodymyr Zelenskyy's office said Russian shelling damaged houses, gas pipelines and other infrastructure in the Nikopol region on the other bank of the Dnieper River — part of fighting in several areas of eastern and southern Ukraine overnight.

The IAEA, braving gunfire and artillery blasts along their route, crossed the front lines to reach the Zaporizhzhia plant on Thursday in a mission to help safeguard the plant against catastrophe — and the fighting in the area has underscored the urgency of their task.

A European nuclear power plant was forced to use a backup generator. If it had failed, it could have caused a radiation emergency.

Russia and Ukraine traded accusations that the other side was trying to impede the work of the IAEA experts, or control the message.

Zelenskyy, in his nightly address on Thursday, had tough words for the IAEA delegation. While applauding its arrival at the plant, he said independent journalists were kept from covering the visit, allowing Russians to present a one-sided, "futile tour."

In a conference call with reporters on Friday, Kremlin spokesman Dmitry Peskov said Moscow considered "positively" the arrival of the mission, "despite all problems and difficulties caused by the Ukrainian side's provocative actions."

The 14-member delegation arrived in a convoy of SUVs and vans after months of negotiations to enable the experts to pass through the front lines. Speaking to reporters on Thursday after leaving colleagues inside, IAEA Director-General Rafael Grossi said the agency was"not moving" from the plant from now on, and vowed a "continued presence" of agency experts.

Grossi said it was "obvious that the plant and the physical integrity of the plant has been violated several times" — but couldn't assess whether by chance or on purpose. “I will continue to be worried about the plant until we have a situation which is more stable,” he said.

Grossi said IAEA experts toured the entire site, including control rooms, emergency systems and diesel generators, and met with the plant’s staff. The plant has been occupied by Russian forces but run by Ukrainian engineers since the early days of the 6-month war.

Russian troops now control two of Ukraine's nuclear power plants, and if they continue, experts say the dangers could be felt beyond the country.

Ukraine alleges Russia is using the plant as a shield to launch attacks. On Friday, Russian Defense Minister Sergei Shoigu rejected the Ukrainian allegations and said Russia has no heavy weapons either on the site or in nearby areas.

Shoigu said Ukrainian forces have fired 120 artillery shells and used 16 suicide drones to hit the plant, "raising a real threat of a nuclear catastrophe in Europe."

Before the IAEA team arrived, Energoatom, Ukraine's state nuclear power company, said Russian mortar shelling had led to the shutdown of one of its reactors by its emergency protection system and had damaged a backup power supply line used for in-house needs.

Russian forces took control of the Zaporizhzhia Nuclear Power Plant soon after the war began and hold adjacent territory along the river.

IAEA announced plans for a news conference later Friday from its headquarters in Vienna to discuss the mission.

Energoatom on Friday accused Russian forces of "making every effort" to prevent the IAEA mission from getting to know the facts on the ground. On Thursday, Russian Foreign Ministry Sergey Lavrov said Russia was making sure that the plant was secure and safe, and that mission “accomplishes all of its plans there.”

Elsewhere in Ukraine on Friday, Zelenskyy's office said four people were killed and 10 injured over the last day in the eastern Donetsk region, a key hub of the Russian invasion, and reported rocket attacks on Sloviansk that destroyed a kindergarten. It said heavy fighting continues in two districts of the Kherson region to the south.