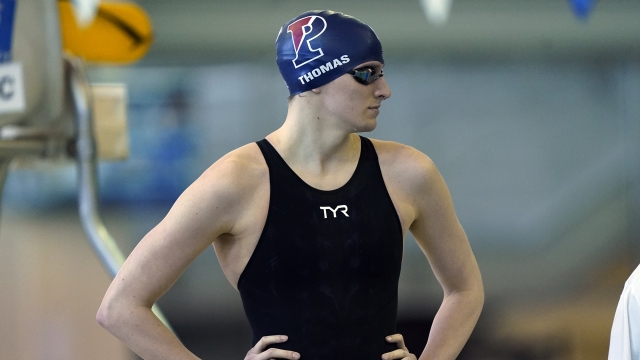 Under a new policy, transgender athletes assigned male at birth have effectively been banned from competing in women’s events.

A new competition policy approved by the International Swimming Federation is making waves.

“Women, who have fought long and hard to be included and seen as equals in sport, can only do so because of the gender category distinction. To remove that distinction would be to the detriment of female athletes everywhere," said Campbell.

Under a new gender policy, transgender athletes assigned male at birth have effectively been banned from competing in women’s events.

FINA competitions and world records will be open to them only if they did not experience male puberty or had male puberty suppressed before age 12.

Speaking before members of FINA Sunday, former Olympic swimmer Summer Sanders of the U.S. and Campbell supported the new policy.

“There must be categories: women, men and, of course, a category for trans women and trans men. A space; I want anyone who loves competing in aquatic sports to have a space and to achieve their goals in that space," said Sanders.

“It pains me that this part of my role may injure, infuriate and potentially alienate people from an already marginalized trans community. However, I am asking everyone to take a breath, to absorb before reacting. Listen to the people who stand up here and tell you how difficult it has been to reconcile inclusion and fairness," said Campbell.

The Human Rights campaign, which calls itself the nation’s largest LGBTQ Civil Rights organization, says the FINA decision reflects a larger attack on transgendered people. It counts more than 75 bills introduced this year in the U.S. on transgender girls and women in sports. Earlier this year, it produced a video on the topic, narrated by Schuyler Bailar, who is a transgender athlete who competed on the men’s team at Harvard.

"There are so many things that threaten womens athletes and womens category, but the inclusion of transgender women is not one of them." said Bailar.

According to a Washington Post, the University of Maryland poll conducted in May that said “55% of Americans opposed allowing transgender women and girls to compete with other women and girls in high school sports and 58% opposed to it for college and professional sports.”

In recent months, the sport of swimming has taken center stage in the debate surrounding transgender participation in sports. In March, Lia Thomas won a Division 1 NCAA swimming championship in the 500-yard freestyle, making history as the first transgender woman to do so. Her success was met with backlash from some competitors, who argued she had an unfair physical advantage.

The policy — approved by more than 71% of FINA members — outlines FINA plans to explore creating an “open competition category” for athletes who do not qualify for the men or women’s category.

FINA says the new policy is effective as of June 20.

But other athletic governing bodies are being watched to see if they follow swimming. Currently, some sports allow transgender competitors if their testosterone levels are below a certain point.