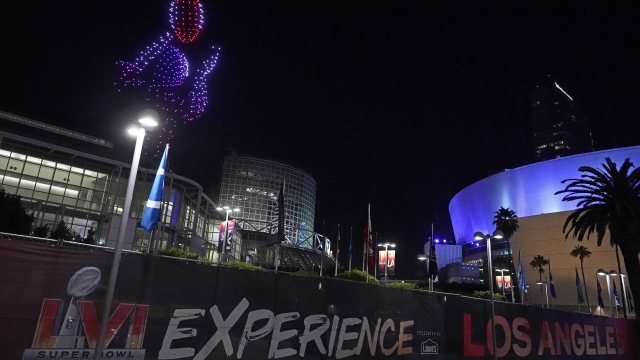 This is the first Super Bowl in Los Angeles since 1993 which means demand for tickets is extremely high.

Less than 24-hours to go and the Los Angeles Rams and Cincinnati Bengals say they are ready.

"We're going to do all the trick plays. We have reverse passes, we've got the hail Mary pass, we've got flea flickers, we've got everything," promised Joe Burrow, Bengals quarterback.

"We stick together. We do what we do. And we'll put ourselves in great position to win games," said Odell Beckham Jr., Rams wide receiver.

Tens of thousands of fans coming to soak in the football fun are ready too.

By the time a formation of air force jets flies over SoFi Stadium just before kickoff, it could be the warmest super bowl ever, but the Bengals say they're not sweating it.

"If this is a heat wave then this isn't so bad. But our guys are prepared. We've practiced the last three days in this weather. They haven't missed a beat," explained Zac Taylor, Bengals head coach.

One person who is feeling the heat NFL Commissioner Roger Goodell. Who this week admitted the league is failing to hire more black coaches and executives.

"We have to do a better job. We have to look is there another thing we can do to make sure we are attracting that best talent and making our league inclusive," said Goodell.

With that tarnished image in mind, the NFL is changing up the halftime show.

"We're gonna open more doors for Hip-Hop artists in the future and making sure that the NFL understands that this is what it should have been a long time ago," said Dr. Dre.

Fans in the stadium will watch the game from seats that are worth their weight in gold.

This is the first Super Bowl in Los Angeles since 1993 which means demand for tickets is extremely high but the cheapest seat here at SoFi Stadium will cost you around $4,500 going all the way up into the neighborhood of $45,000 -$50,000.

Around 100-million people will watch on TV, and more people than ever will be betting on the game, wagers expected to top a combined $7.6 billion.

One person placing a couple of big bets on the Bengals, Houston furniture businessman Matress Mack. He's got two big bets totaling $9.5 million. The Bengals are the underdogs but if they win, Mattress Mack would take in about $16 million. Not a bad return.