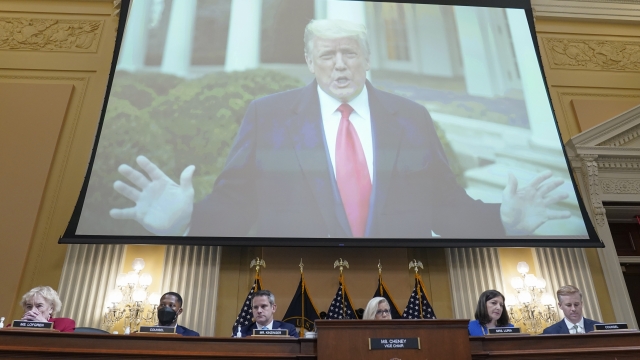 Testimony from former aides weaved the timeline together, which was also illustrated by new interviews and never-before-seen photo and video evidence.

This morning, the January 6th select committee says it's continuing its investigation after wrapping up its last public hearing in this series.

The main focus of the latest hearing was what then-President Donald Trump doing in the White House while hundreds of his supporters violently pushed past police officers to storm the Capitol.

"President Trump did not fail to act during the 187 minutes between leaving the ellipse and telling the mob to go home. He chose not to act," Rep. Adam Kinzinger said during the hearing.

Lawmakers broke down – minute by minute – what happened during the three hours that, they say, President Trump was "derelict in his duties…" as the attack unfolded.

"Rather than uphold his duty to the constitution, President Trump allowed the mob to achieve the delay that he hoped would keep him in power," Rep. Elaine Luria said.

President Trump was wrapping up a speech at the ellipse, during which he told the crowd to head to the capitol.

From there, the panel says the president retired to his dining room for hours.

He watched coverage of the attack on Fox News; He made phone calls to senators to try and delay the certification of the 2020 election; But no real effort to end the violence, even at the expense of his own vice president.

"I've seen the impact that his words have on his supporters. They truly latch onto every word and every tweet that he says," Matthews said. "And so, I think that in that moment, for him to tweet out the message about Mike Pence, it was him pouring gasoline on the fire."

The timeline was further illustrated by new interviews and never-before-seen photo and video evidence.

"The members of the V.P. detail at this time, were starting to fear for their own lives," a White House security official said during an interview. "There was a lot of yelling, a lot of very personal calls over the radio, so it was disturbing."

Perhaps some of the most compelling footage was outtakes from President Trump's address to the nation the day after the insurrection.

As the committee prepares its final report on what happened that day, Rep. Kinzinger made a promise.

"When we present our full findings, we will recommend changes to laws and policies to guard against another Jan. 6," he said. "The reason that's imperative is that the forces Donald Trump ignited that day, have not gone away."

The hearing marked the eighth time the committee has met to present evidence surrounding the U.S. Capitol insurrection.

The committee is planning to hold additional hearings in September.