Officials Say Fire At Notre Dame Cathedral Is Under Control 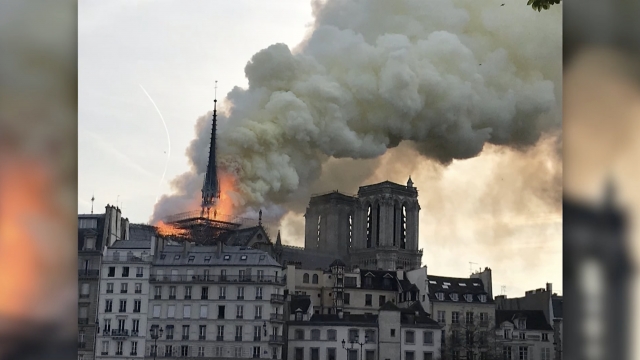 A massive fire engulfed Notre Dame Cathedral on Monday, but French officials said both towers and the main structure are safe.

There's still hope for the Notre Dame Cathedral in Paris after a massive fire broke out Monday. French officials said the fire is under control and that both towers and main structure of Notre Dame are safe.

It's still unclear how the fire started, but local officials are reportedly treating it as an accident. Flames could be seen from the back of the cathedral, which was under renovation.

The cathedral was completed in 1345 and attracts millions of tourists every year.

Shortly after the fire started, the mayor of Paris warned people to stay away from the area. She said residents living near the cathedral were evacuated in case of a collapse.

Police say the building's spire and roof have collapsed. French President Emmanuel Macron is treating this as a national emergency. He arrived at the scene of the fire and told reporters he's launching an international fundraising campaign to help rebuild. He said, "We will rebuild this cathedral together."

The Paris prosecutor's office has opened an investigation into the fire. No deaths have been reported, but an official said a firefighter was "seriously injured."