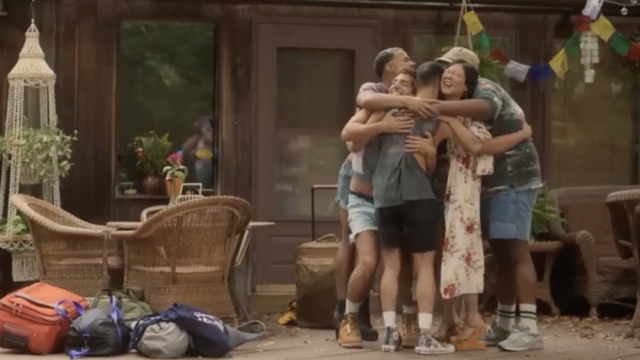 A new film debuting June 3 on Hulu is lighthearted, but also blunt, in its depictions of racist microaggressions in the LGBTQ community.

Fire Island in New York is the summer getaway of choice for many in the queer community. Now, it's also a film — a modern, gay and Asian-led "Pride and Prejudice" adaptation written by and starring comedian Joel Kim Booster and directed by Andrew Ahn.

"It's so transformative to be in a place like Fire Island with people that, you know, you have chosen to be your family, and it's really powerful," Kim Booster said. "I was just pulling from that experience, really."

"There are certain scenes that just feel like the queer family experience," Ahn said. "It was really for our community — that was the target audience for us, and I think it shows in the film."

The romantic comedy is a love letter to chosen families and queer friendships, and Kim Booster wrote himself and his co-star Bowen Yang as Jane Austen's famous sisterly duo: "the gay Chinese Jane [Bennet] to [his] gay Korean Lizzy."

But in the spirit of Jane Austen, "Fire Island" is also a biting social satire about classism and racism within today's LGBTQ communities.

"I was most struck by, the first couple of times going out to Fire Island — and even here in Chicago, when I was first coming out as a gay Asian man in this community — the ways in which we sort of discriminate against each other when there's no one around to discriminate against us," Kim Booster said.

The film is both lighthearted and blunt in its depictions of racist microaggressions.

But all of that is based on real-life experiences. In 2018, for example, the gay dating app Grindr was hit with a class-action lawsuit for "sexual racism" and exclusionary language against men of color. It wasn't until 2020 that Grindr removed its "ethnicity filter" from its platform.

"It was important to me to be honest about that," Kim Booster said. "I think this movie could have easily been a fantasy if I wanted it to be, but I really wanted to ground it in sort of, you know, the mix of the beauty of gay chosen families, but also the toxicity that can come with this community sometimes."