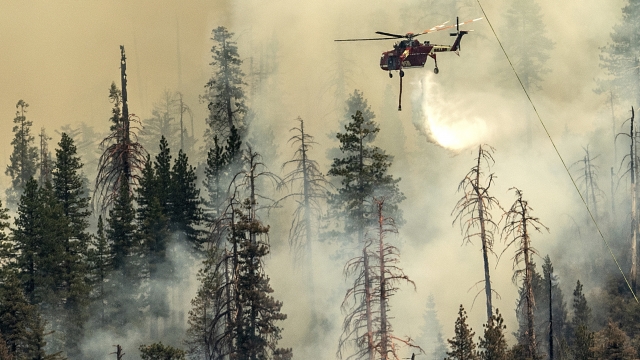 The Washburn fire expanded hundreds of acres in just one day, and Yosemite officials say it could continue burning for weeks.

Hundreds of firefighters are battling the massive Washburn wildfire raging through the Yosemite National Park.

Moving foot by foot, they're clearing and setting back burn fires, while working non-stop to protect hundreds of giant sequoia trees.

There are also fire crews mopping up the areas already burnt.

"Crews use their bare hands and check to see if there's still hot spots, so they’re going through and making sure those hot spots are gone," said Robbie Johnson, a public information officer with California Interagency Incident Management Team 13.

The hot spots glow at night, helping those tasked with calming them.

The fire increased by almost 1,000 acres in just one day, pushing down the containment efforts.

Another 100 firefighters have been called in to help, as smoke billows and the fire burns through a part of the park full of dead trees and thick brush.

The National Park Service is using prescribed burns to try to reduce the fire fuels on the forest floor.

“We mimic the natural regime that’s been occurring here for thousands of years, and so for us, prescribed burns get the old fuels, new growth down," said Mark Ruggiero, fire information officer for national parks. "So when fires enter those areas, the fire will slow down, and we can stop it.”

Yosemite Fire and Aviation has turned to the sky for help, with 10 helicopters crisscrossing the park and delivering thousands of gallons of water to the front line.

“Heliwell is strategically placed to be close to the fire, and that means helicopter pilots get their water, get that water on the fire, come back and shorten that travel time between the two locations," Johnson said.

These minutes matter, as the fire continues to burn near the Mariposa grove of sequoia trees.

"They’re still in danger, but the fire has not damaged any sequoias in this fire," Ruggiero said.