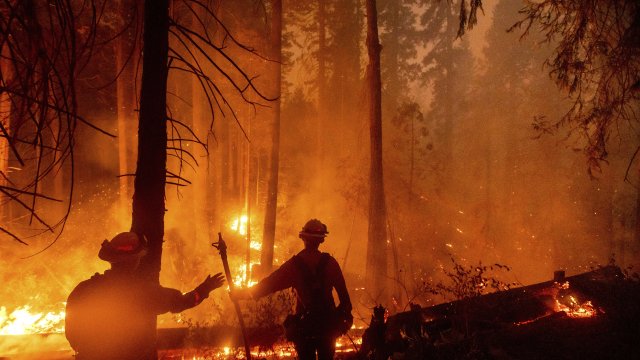 The state has seen 900 wildfires since mid-August.

New evacuation orders are in effect as the largest fire, the Creek Fire, burns through the Sierra National Forest in Central California.

The fire is spreading quickly, moving 15 miles in just one day over the weekend. And the Creek wildfire is just one of many.

The California Department of Forestry and Fire Protection reports there are more than 20 active wildfires. California has already set a record with 2 million acres burned so far this year. That's more than the deadliest wildfire in California's history — the Paradise Camp Fire.

The state has seen 900 wildfires since mid-August. More than 3,300 homes and buildings have been destroyed.

For those forced to leave their homes, seeing the destruction is devastating.

"It's not just our life that went down and went up in flames, it was my mother-in-law's remains," said Anabel Bratcher. Her husband, Dewy, said: "It's just begin again, it's not the end and that's the way it's going to be."

Fire officials say the situation could get even worse as September and October are historically the worst fire months.

Monday marked the 73 day the city had seen temperatures over 90-degrees this year.

Parts of northern Colorado were also told to evacuate Monday due to the Cameron Peak wildfire. So far, it has burned through over 100,000 acres.