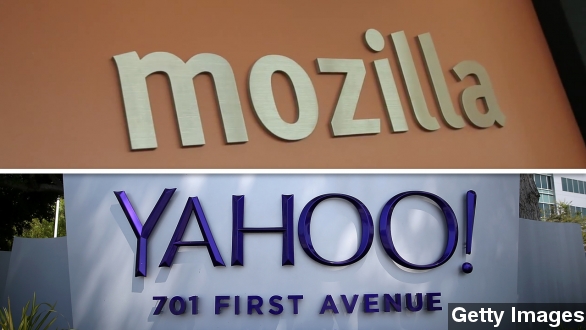 Mozilla on Wednesday announced it would be replacing Google with Yahoo as Firefox's default search provider.

If you use Mozilla's Firefox browser, this one's for you. Mozilla is teaming up with Yahoo in a five-year deal to make Yahoo the default search provider in Firefox.

That spot previously belonged to Google, and was held by the company since 2004. Mozilla said it decided to make the switch in the interest of choice and independence. (Video via Google)

As part of the partnership, Firefox will sport "a new enhanced Yahoo Search experience that features a clean, modern interface." The updated look will make its way to the browser in December.

It's an interesting move, to say the least, given Google reportedly paid Mozilla $300 million a year to be Firefox's default search provider.

And since most of Mozilla's revenue comes from deals with search providers, it's safe to say Yahoo and Mozilla's partnership would need to be lucrative enough for the company to safely make the switch.

Yahoo CEO Marissa Mayer said in a blog post about the partnership, "This is the most significant partnership for Yahoo in five years and we're so proud that Mozilla has chosen us as their long-term partner in search."

And given Mozilla Firefox users rack up a whopping 100 billion searches a year, it's clear to see how significant the partnership could be. Each search query leads to advertising revenues for search providers.

With 61 pre-installed search providers, Mozilla says it has more search options than any other browser. And fret not — Google is still on the list.