Small Towns Struggle With Fireworks Costs For Fourth Of July 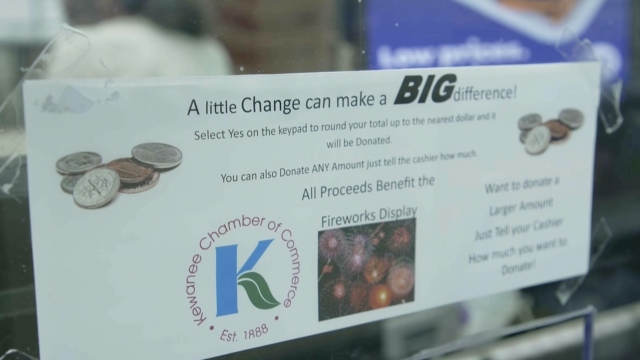 Most professional-grade fireworks are made in China, and costs related to congestion in U.S. ports, overseas shipping and transportation have jumped.

Kewanee, Illinois, is technically a city, but feels very much like small-town America.

Population: A little more than 12,000 people. It is about a three-hour drive from Chicago and an hour from Davenport, Iowa.

"Ever since I've been a little boy, we've always had a 4th of July fireworks celebration," Kewanee Chamber Of Commerce Executive Director Mark Mikenas said.

But this year's Independence Day fireworks celebration is going to be different — it'll cost more.

The majority of professional grade fireworks are made in China, and costs related to congestion in U.S. ports, overseas shipping and transportation have increased.

That puts pressure on small towns and cities, like Kewanee. Some places have even canceled celebrations.

"Well, just about like anybody's reaction was like, 'Oh, boy. How are we going to do it?' Mikenas said.

Pigs surround Mikenas' office, as Kewanee calls itself "the hog capital of the world."

He says city residents fundraise about $10,000 each year for fireworks, but this year's effort has been tough with costs skyrocketing.

"You're always worried about that at any time raising funds," he said. "It's not easy, especially with, you know, gas prices going up here recently, inflation levels coming up."

Mikenas says fireworks cost 30% more this year compared to last. They plan to raise more than $12,500 to help pay for it. And business owners in town are helping out.

The Wanee is the only movie theater in the city. Bud Johnson started working there in 1976 and now owns the theater. He says the fireworks show is a staple for this community.

"It's really big," he said. "It gets everybody together. It brings a lot of people into town. And it's so that people can celebrate, enjoy and have fun."

To help, he's organizing a free movie day with all the donations going to the fireworks fundraising efforts. And for the entire month of July, a portion of sales from popcorn buckets will also go toward the effort.

"For every bucket sold, we donated a dollar," Johnson continued. "It is a community town. ... And that's what it's all about — coming together and doing what needs to be done to make things happen."

When the pandemic hit and his theater was forced to close, the community came together and bought buckets of popcorn to help it stay afloat. After all, Johnson has been giving back to the community for years.

And helping each other seems to be a theme in Kewanee. Down the street, another business is lending a hand.

"We're doing our round-up campaign right now," Save a Lot Store Manager Brad Whitcher said. "We ask every customer at the register if they want to round up to the nearest dollar and donate to the fireworks. ... The fireworks is a huge thing every year. … But it takes a lot of money to do it. And this is something that is kind of an easy thing for customers to do."

Mikenas showed Newsy around the area where the fireworks are set to launch. So far, he says they've raised $11,000 and he's waiting for more to come.

When asked whether it's worth having the celebration despite the prices going up, Mikenas said: "We need to celebrate our birthday. We've been doing this for a couple of hundred of years now. Why stop?"