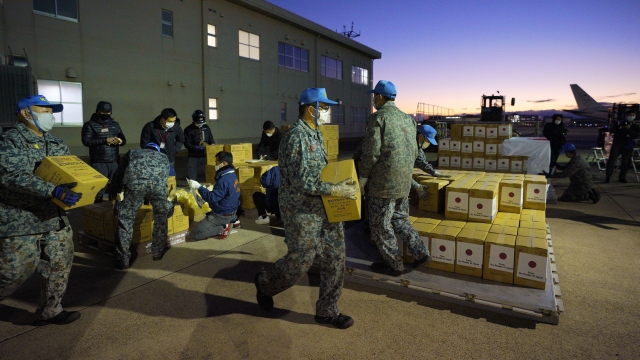 The first flights carrying fresh water and other aid to Tonga finally arrived Thursday after the Pacific nation’s main airport runway was cleared of ash left by a huge volcanic eruption.

There is no internet access, and the company that owns the single underwater fier-optic cable says it was likely severed in the eruption.

Japan also said it is sending emergency relief, including drinking water and equipment for cleaning away volcanic ash. Two C-130 Hercules aircraft left Thursday evening, and a transport vessel carrying two CH-47 Chinook helicopters will depart as soon as it is ready, the Defense Ministry said.

The first deliveries were dropped off without the military personnel coming in contact with people at the airport in Tonga. That’s because Tonga is desperate to make sure foreigners don’t bring in the coronavirus. It has not had any outbreaks of COVID-19 and has reported just a single case since the pandemic began.

U.N. humanitarian officials report that about 84,000 people — more than 80% of Tonga’s population — have been impacted by the volcano’s eruption, U.N. spokesman Stéphane Dujarric said, pointing to three deaths, injuries, loss of homes and polluted water.

Communications with Tonga remain limited after Saturday's eruption and tsunami appeared to have broken the single fiber-optic cable that connects Tonga with the rest of the world. That means most people haven’t been able to use the internet or make phone calls abroad, although some local phone networks are still working.