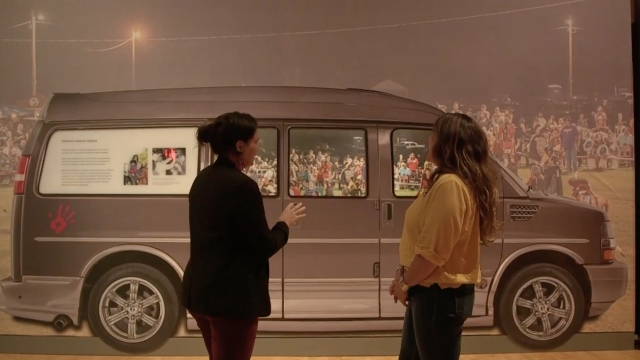 The First Americans Museum is telling the collective story of Oklahoma's 39 tribes, from their cosmological origins to the present day.

On the banks of the Oklahoma River, the new First Americans Museum in Oklahoma City aims to tell the story of the state’s 39 tribes through creation stories, tales of struggle and accounts of survival and power.

“We have a lot to do together, but we’re Indigenous," said native rights activist Casey Camp Horinek. "That means we’re strong, we’re resilient and we’re rising."

The 175,000 square foot space is stitched together with stories and interactive exhibits, like how to play the Handgame — a Tron-inspired Native American Chunkey game — and a Pow Wow van created by Choctaw and Kiowa artist Stephen Paul Judd.

"Thinking about how we can pull apart the strength of these stories to speak to the resilience of our community members, to speak to the the tragedies of our of our histories, and also to speak to the beauty of each of our collective cultural backgrounds and aesthetic systems — those are things that it took throughout the facility, a very careful construction," Ahtone said. "For the exhibitions, it took an inter-tribal, all-Native curatorial team to really nudge out in all the best ways that we could bring to the project."

Leslie Halfmoon, the museum's curatorial specialist and media coordinator, says the building's circular design was intentional and was meant to reflect the seasons. It features a 21st century mound that is a tribute to the many tribes in Oklahoma who descend from mound builder cultures.

“So, looking to those ancestors as a model into how to incorporate those things into our site — this giant earthwork goes up to a 90 foot peak and really the whole site is laid out like a cosmological clock," Halfmoon said.

"It was a priority for us to celebrate the diversity of the tribes that are here in Oklahoma," Ahtone said. "It was really important for us because of the history of museums in causing a cultural erasure of our people to really emphasize the living presence of our tribal community members."

The galleries feature stories from scientists, inventors and those who served in the military, as Native people have some of the highest rates of service. They are also filled with stories about sports and sports history. Indigenous people have a rich history of participating in basketball, boxing and, of course, stickball.

“It’s an ancient game," Halfmoon said. "It’s been on the North American continent for centuries, and it’s still played today. Depending on what tribe is playing, the rules are different. It’s a national sport. We wanted an area to highlight some of our athletic heroes, because all of these people are obviously Native to Oklahoma."

Ahtone says the U.S. has a colonial and racist history when it comes to collecting sacred objects that belonged to Native people, including human remains that still sit in boxes and in storage at some of the most well-known institutions in the U.S. She says the First Americans Museum would never do that and even struck a deal with the Smithsonian to bring objects that were taken from Oklahoma tribes back to the state to connect them with their ancestors.

The museum staff say they feel a personal responsibility to those who didn’t live to see the museum open, like the aunties, the grandmas and uncles.

Native people make decisions considering the next seven generations, and the museum staff and the stories contained within it reflect those who came before and those whose lives will be touched by what they see and hear in the gallery for years to come.