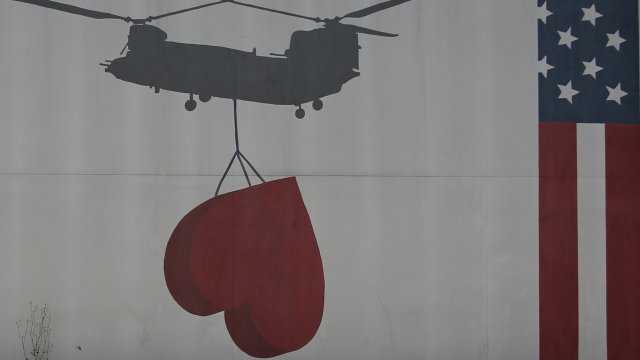 They're being flown out as the U.S. winds down its military presence in Afghanistan.

It’s a new day for more than 200 Afghans who boarded a plane in Kabul to escape an encroaching Taliban and landed on American soil early Friday morning.

Buses took them to Fort Lee, a military base in Virginia, where they’ll finish the special immigrant visa application processing in safety.

"We have the first landing of Afghan SIVs coming to the U.S. in this new chapter as the U.S. is ending its combat presence in Afghanistan," said Sen. Tim Kaine.

They’ve already undergone background checks to confirm they worked with U.S. troops and diplomats. And officials expect this first group to be here for seven days.

They’ll then relocate to cities from coast to coast – communities where other Afghans, family members and refugee resettlement programs can help them.

It’s a bittersweet moment: leaving with just their luggage in fear of Taliban retribution.

"We were hoping that those Afghans who had worked with us, that had served us, that had risked their lives, we kind of saw them as part of the future of Afghanistan," said Carter Malkasian, a former senior adviser to the Joint Chiefs of Staff. "And I think most of us were hoping that they would go on to take on important roles in the government or in their country. And many, many of them have done. So it is painful to see that many of those people who are so qualified on to have to leave the country."

Culture, religion, and even the polygraph examiner can influence the test results, says former Chief of Polygraph Tom Mauriello.

A source tells Newsy “near-daily” flights are expected by mid-August under Operation Allies Refuge. But some 20,000 applicants remain in the pipeline as the U.S. withdraws and the Taliban takes more territory.

“Much work remains ahead to meet America’s commitment to those who have been committed to us," said Ross Wilson, chargé d'affaires at the U.S. Embassy in Kabul.

State Department reports show Afghans have been waiting longer and longer for special immigrant visas over the years, the average government processing time going from 270 days in 2016 to 587 in 2018 and hitting 996 days by the end of 2020. The Department of State’s Office of Inspector General found the method for collecting and confirming wait times was “potentially flawed” -- using different methodologies to calculate and report information.

Officials say they're “going [to] be moving folks as fast” as they logistically can to bring 2,500 Afghans to this base and more to third countries like Qatar and Kuwait.

Meanwhile locals in neighboring Colonial Heights, Virginia, have colliding views about their incoming neighbors: "My husband is in the military, and I’m just worried about the safety," said Reshona, a local resident. "I mean, if they are here for good reasons, do they really know them, are they going to turn on us?"

“We have to support our troops to the fullest that we can, and those that have given aid and support to our troops overseas need our support as well," said Ken Smith, a local resident.