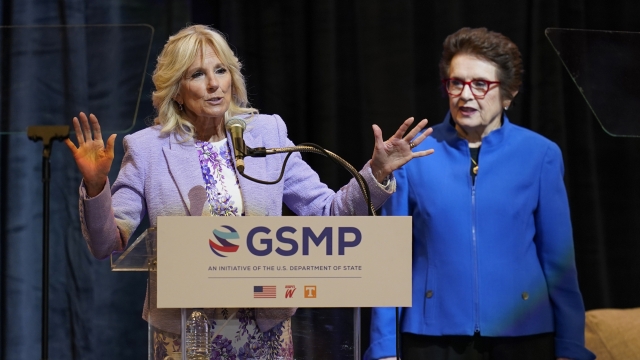 The 1972 legislation prohibits discrimination on the basis of sex in federally funded education programs.

The legislation was enacted in 1972 and prohibited discrimination on the basis of sex in federally funded education programs. It is credited with promoting gender equity in sports and advancing opportunities for millions of American women since then.

"Just look at the legacy it created," said Biden. "It's all around us today."

"Here in the United States, millions of girls have grown up, able to play sports, to build self-reliance and self-esteem, to learn teamwork and leadership. And they've been able to get scholarships that put college within their reach."

"Title IX is one of the most important pieces of legislation of the 20th century," said King. "It is a law that speaks to the importance of gender equity in this country. It stands as a benchmark of global significance."

King pointed out that the primary beneficiaries of Title IX have been white suburban girls.

"Let's use this milestone anniversary to re-energize our focus on strengthening and advancing equity and opportunity for all girls and women, but especially those who have been left behind by the law," she said, pointing to girls of color, girls with disabilities, trans athletes, and all LGBTQ+ youth.