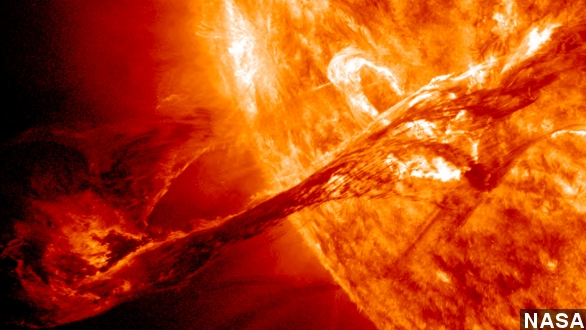 The coronal mass ejection could have knocked out power, positioning and communications systems the world over.

So it turned out 2012 wasn't the big "end of the world" cataclysm some folks thought it would be, but a new report says it came closer than you might expect. (Via NASA)

The study, published in Nature Communications, looked at solar storms in 2012 and says this explosion, captured by NASA's STEREO observatory, just missed hitting Earth by a few days.

Not to scare you, but coronal mass ejections, where a bit of the sun breaks off and goes flying toward Earth, are common, and if a big one like 2012's hit us, it could pretty much collapse our electronic infrastructure.

In the press release accompanying the study, the researchers describe a perfect storm: two blasts with the power of a billion hydrogen bombs occurring back-to-back, racing along a path cleared out by a mid-sized blast a few days earlier. And all of it went right through the area where Earth had just been. (Via University of California, Berkeley, NASA)

These kinds of solar events are the cause behind auroras, the northern and southern lights. Charged particles light up Earth's magnetic poles, putting on a massive show. (Via NASA)

But they do way more than that. These magnetic storms can wreak havoc on electronics.

The biggest solar storm ever recorded took place in 1859. The so-called Carrington Event caused auroras visible all the way into the tropics. The near-global spectacle has become the stuff of legend: the NOAA tells the tale of Colorado gold miners who got up and went to work at 1 a.m. because the lights were so bright they thought the sun had come up, and Ars Technica posts a supposed transcript between two telegraph operators who were able to keep sending signals across the country with no batteries because there was so much current in the cable. (Via NASA, NOAA, Ars Technica)

Of course, that was before most of the electronics we have now even existed. A storm that size today would be much more destructive, taking out power grids, satellites and communications.

Estimates vary, but generally it's thought another Carrington Event now would cause trillions of dollars in damages and could take years to recover from, maybe even decades. (Via National Academy of Sciences)

And guess what? That's exactly the kind of storm we unknowingly avoided in 2012! Fingers crossed for 2014, everyone.