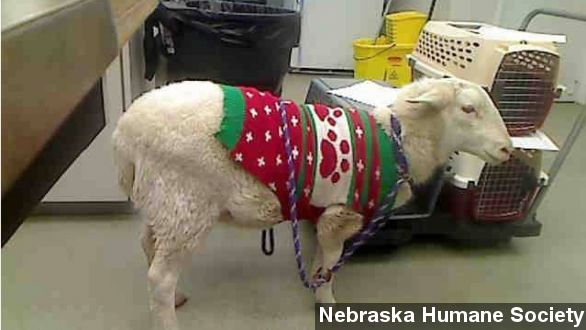 The sheep found by the Nebraska Human Society wandering around Omaha wearing a Christmas sweater was returned to its rightful owner.

For those expecting a baaaad ending to this story, think again.

The sheep found by the Nebraska Humane Society wandering around Omaha wearing a Christmas sweater was returned to its rightful owner Tuesday night. (Video via KMTV)

And the sheep's owner was definitely happy to see him alive.
Margaret Vasquez told WOWT, "I was looking for him and all worried for him. ... It was like losing my kid. I was all scared and didn't know what to do."

The owners reportedly think the sheep, named Gage, snuck off their property; they didn't notice he'd disappeared until Monday. Meanwhile, the Humane Society found him wandering on a nearby street, so they took him in. (Video via KPTM)

Plus, little Gage couldn't pull the wool over the media's eyes. As often is the case with bizarre stories like this, outlets all over the country picked up the sheep saga.

So who gets credit? Well, leave it to the power of social media.

A friend of the family who located the sheep told WOWT she stumbled on a photo of the festive lamb on Facebook.

And, of course, the whole dressed up animal thing has become an internet sensation before. Remember "IKEA Monkey" from two years ago?

This little guy was found strolling through the popular furniture store with a tiny puffy coat, and that's all it really took for it to chalk up retweets and favorites galore. (Video via ABC)

And, if you look closely here, you'll notice the monkey was found the same day Gage was returned to his owners two years ago. Hmmm ... animal conspiracy, anyone?

This video includes images from the Nebraska Humane Society and music from Bensound / CC BY ND 3.0.