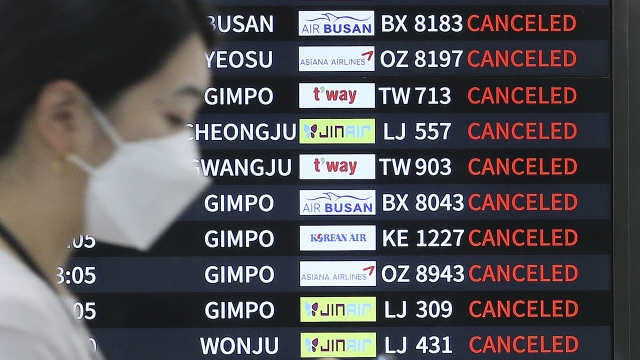 Around 370 domestic flights and 100 ferry services were grounded as the region braces for Typhoon Hinnamnor.

Hundreds of flights were grounded and more than 200 people were evacuated in South Korea on Monday as Typhoon Hinnamnor approached the southern region with heavy rains and winds of up to 105 miles per hour, putting the nation on alert for its worst storm in decades.

South Korea’s weather agency said the country will start to feel the full force of Hinnamnor, the strongest global storm this year, by early Tuesday when it is forecast to graze the southern resort island of Jeju before making landfall near the mainland city of Busan.

Government officials raised concern about potentially huge damage from flooding, landslides and tidal waves triggered by the typhoon, which comes just weeks after capital Seoul and nearby regions were hit with heavy rainfall that unleashed flash floods and killed at least 14 people.

Officials say Hinnamnor could bring more powerful winds than 2003 Typhoon Maemi, which left 117 people dead and was the strongest storm to make landfall in the country since the start of record keeping in 1904.

Typhoon Hinnamnor is forecast to move gradually northward into the East China Sea with maximum sustained winds of nearly 110 miles per hour.

As of Monday evening, Hinnamnor was over the open sea 112 miles southwest of Jeju. It has dumped more than 24 inches of rain in the central part of Jeju since Sunday, where winds were blowing at a maximum speed of 77 mph and were picking up.

South Korea’s Ministry of the Interior and Safety said there were no immediate reports of casualties. At least 11 homes and buildings were flooded in Jeju while more than 270 people were forced to evacuate in Busan and nearby cities because of safety concerns.

Around 370 domestic flights and 100 ferry services were grounded and hundreds of roads and bridges were closed nationwide as of Monday evening while more than 66,000 fishing boats returned to port.

Kindergartens and elementary schools in Seoul and all schools in Busan and nearby southern regions are scheduled to be closed or shift to online classes Tuesday, officials said.

North Korea was also bracing for Hinnamnor as it reported increasingly heavy rain in all parts of the country except for its border region with China. Agricultural workers across the country were engaged in “all-out efforts” to minimize damage to crops while officials were encouraged to take “double and triple emergency measures” to protect buildings and equipment from flooding and landslides, the North’s state media said.

South Korea’s military said North Korea also discharged water from a dam near its border with the South in an apparent preventive step without notifying its rival. South Korea’s Unification Ministry, which handles inter-Korean affairs, said the North has so far ignored Seoul’s request to give notification before it releases water from the Hwanggang Dam.

Cities in eastern China suspended ferry services and classes and more than 100 flights were canceled in Japan on Sunday as Hinnamnor passed through the region. The typhoon is on track to move closer to eastern China later in the week.