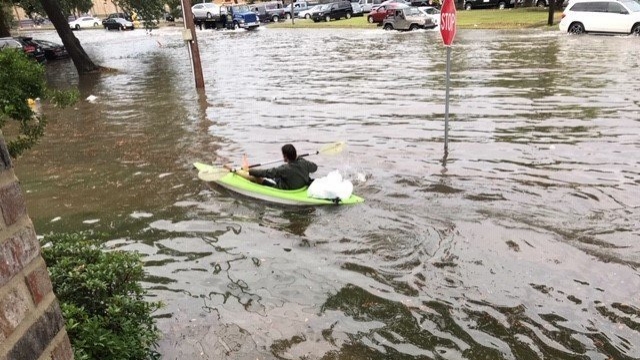 New Orleans could be hit with one of the worst flood events in its history when Tropical Storm Barry makes landfall this weekend.

An already rain-soaked New Orleans is bracing for a developing hurricane that lurks off the Gulf Coast. The storm could cause one of the worst flood events in the city's history.

On Wednesday morning, heavy rainfall led to sudden, widespread flooding across the Big Easy. The Sewerage and Water Board of New Orleans said the city was drenched in more than eight inches of rain in just three hours.

But the worst is still on the horizon. Tropical Storm Barry officially formed in the Gulf of Mexico Thursday morning. Meteorologists predict the slow-moving system will dump up to 15 inches of rain on Louisiana throughout the weekend.

That much rain coupled with storm surge could cause the Mississippi River to rise to over 20 feet. And that would be a big problem, considering the river levees protecting New Orleans are only 20 feet high.

As Axios notes, the city's levee system would typically be able to withstand a storm like this. But weeks of significant rainfall along with snowmelt across the Plains and Midwest have left the Mississippi River swollen for months, creating a potentially dire situation for New Orleans.

Louisiana Gov. John Bel Edwards issued a state of emergency ahead of the storm and urged residents to check their emergency supplies and make a game plan for their families and pets. The storm is expected to make landfall as a hurricane along the Louisiana coast by Friday night or Saturday.