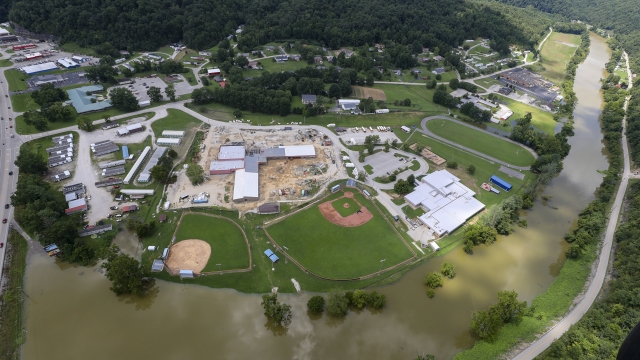 Perry, Knott and Letcher Counties are some of the poorest in the U.S., and they continue to be under a flood advisory after streams drenched the area.

The Kentucky National Guard has rescued hundreds of people from the floods in the state, with authorities saying they're still looking at every inch of every stream from the air. But as the days go on, the search for the missing is increasingly a recovery effort.

Water is moving through Troublesome Creek in Perry County, Kentucky at a troubling rate — a sign a true reprieve from danger is yet to come.

Gov. Andy Beshear says the death toll from the floods has now rose to 37, with hundreds still unaccounted for.

In hazard, many flood victims are now homeless.

“You just feel helpless, you know?" said Larry Stacy, a survivor of the flood. "Helpless, ain't nothing to describe it."

Stacy sheltered at one baptist church since being hauled out of a torrent of mud from a helicopter.

“If it wasn’t for this church, I don’t know what we’d be doing," Stacy said.

“There was at one point four to six feet of water," she said. "We couldn’t go anywhere. The power was out."

Campbell is helping her grandchildren care for their cats.

“It was terrifying, man," said Toby Campbell, Carol's grandson. "It was six inches from getting to the top of the roof. We got airlifted out of there by a helicopter. It was the most terrifying thing I've been through.”

One member of Congress pledged to get  federal dollars for flood-ravaged constituents.

“There are bridges that are gone, water services, electric," Rep. Hal Rogers said. "So all of the infrastructure we’ve spent so much time and money on has been destroyed or damaged heavily."

The federal government is committing $1 billion to states hit with extreme weather.

“We’re just grateful for everybody who helps and grateful we have shelter over our heads," said Russell Daugherty, a survivor of the flood.

To rebuild, the fiercely proud and independent people of coal country are going to need a lot of aid. Four more inches of rain fell there Sunday, with many creeks still swelling with rapidly flowing water.

In addition to loss of human life, local officials say that in Perry County alone, flood waters wiped out dozens of bridges.