Democrats Flip Another State Seat — This Time In Florida 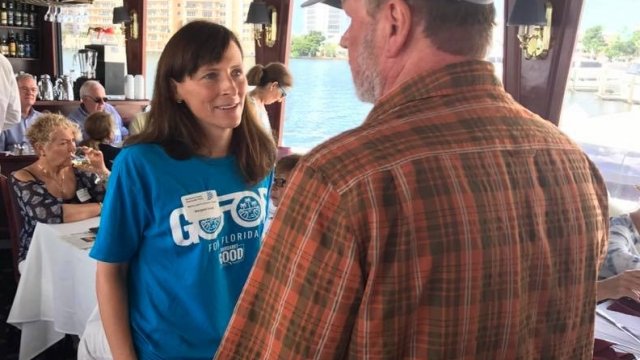 Margaret Good is the 37th Democrat to win a Republican-held legislative seat since the beginning of 2017.

Democrat Margaret Good has won the special election for a Republican-held seat in Florida's House.

The district is relatively competitive; President Donald Trump won it in 2016 with 51 percent of the vote to Hillary Clinton's 46 percent. But Good's win is part of a larger wave of Democratic victories in state legislatures across the country.

Republicans and Democrats have contested over 80 special elections since 2017 began. Democrats won 37 Republican-held seats in those elections, while Republicans flipped four Democratic seats.

And FiveThirtyEight notes win or lose, Democratic candidates ran an average of 12 percentage points ahead of each district's partisan leanings during the 2017 special elections.

Not A Fan Of D.C. Drama? Meet 'America's Cabinet'

The group is hoping to counter the D.C. drama with ideas from local government.

Democrats' renewed focus on winning state-level races might be playing a role. Republicans still control the lion's share of state legislatures, but organizations like the Democratic Legislative Campaign Committee are pouring more cash into state races in hopes of changing that.

So far, the only national-level effect of the Democratic wave has been U.S. Sen. Doug Jones' narrow win over Republican candidate Roy Moore. But Democrats are hoping to carry this state-level momentum into the 2018 midterm elections in November.