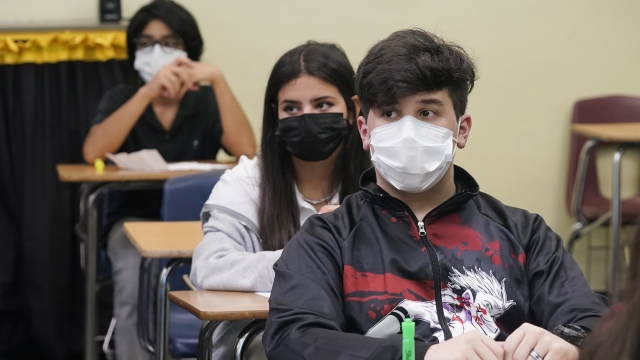 The state plans to appeal.

A Florida judge is blocking Governor Ron DeSantis' executive order that allows parents to opt out of mask mandates, in a ruling read in court Friday.

Judge John Cooper granted an injunction against state education authorities, though not the governor, preventing them from taking action to ban mask mandates without parent opt outs in the case brought by several Florida families and attorneys.

"I am elated by this ruling because the judge clearly went on the side of science, medicine, our children and democracy," said plaintiff Leslie Abravanel.

The ruling isn't in effect until the final order is signed.

"The judge said that's unconstitutional because it doesn't meet the rational basis test and the compelling state interest of the local elected officials," said Jay Wolfson, a senior associate dean at the University of South Florida Morsani College of Medicine.

The case centered around parent rights and government authority, came as nearly a dozen Florida school systems already defied the governor’s executive order despite the threat of financial consequences.

"But this does not address by the way that other part of the governor's order that says if school districts do violate this, they could have their money removed," said Wolfson.

Alachua and Broward County schools, two districts the state already took first steps against to withhold some funding over their mask mandates, were happy with the ruling.

"His ruling is a validation of the right of locally-elected school boards to protect their students and communities during this crisis without fear of political or financial retribution," said Carlee Simon, the superintendent of Alachua County Schools.

The state plans to appeal.

"We are immensely disappointed that the ruling issued today by the Second Judicial Circuit discards the rule of law. This decision conflicts with basic and established rights of parents to make private health care and education decisions for children. We will continue to fight to make sure every child has access to education. We are committed to the fundamental rights of parents and will push forward on appeal to ensure that this foundation of democracy is upheld," said Jared Ochs, the director of communications for the Florida Department of Education.

The communications for the governor's office stated: "It's not surprising that Judge Cooper would rule against parent's rights and their ability to make the best educational and medical decisions for their family, but instead rule in favor of elected politicians. This ruling was made with incoherent justifications, not based in science and facts – frankly not even remotely focused on the merits of the case presented. We are used to the Leon County Circuit Court not following the law and getting reversed on appeal, which is exactly what happened last year in the school reopening case. We will continue to defend the law and parent's rights in Florida, and will immediately appeal the ruling to the First District Court of Appeals, where we are confident we will prevail on the merits of the case."

The debate is playing out across the country as other states ban mandates, while COVID spreads and frontline workers continue to treat largely unvaccinated populations.

"These guys are hero because they're protecting people and keeping everybody safe. And I think it's something that's undervalued in our society right now," said Adam Rudd, the CEO of Largo Medical Center.

"The bottom line is the staff is really, really getting exhausted. And this has been going on for several weeks now and there's a limit for how long you can push it," said Justin Senior, the CEO of the Safety Net Hospital Alliance of Florida.